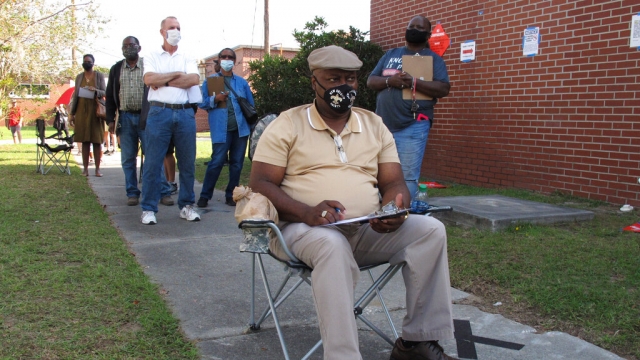 SMS
Here's How Both Presidential Candidates Hope To Win Over Black Voters
By Amber Strong
By Amber Strong
October 21, 2020
While the majority of Black voters went with Hillary Clinton in 2016, President Trump picked up 14% of Black men.
SHOW TRANSCRIPT

With African Americans making up 13% of eligible voters and less than two weeks to the election, both President Trump and challenger Joe Biden are working to win them over.

Both campaigns released competing plans on their vision for Black America.

And Biden’s "Lift Every Voice", titled after the Black national anthem

[Lift every voice and sing.]

On criminal justice: President Trump wants to increase the hiring of rehabilitated individuals with criminal records. Biden wants to decriminalize the use of cannabis and end all incarceration for drug use alone.

On education: President Trump wants to close failing schools and instead give students and their families school choice through vouchers. Biden plans to call for universal pre-kindergarten for all 3- and 4-year-olds.

On COVID-19: Biden plans to call for a rent freeze for qualifying individuals throughout the pandemic and cancel $10,000 of federal student loan debt. President Trump’s plan doesn’t mention COVID-19.

“Arrest the president, you got the evidence,” rapped Ice Cube.

Ice Cube has made it clear he is not endorsing the president and his team presented the plan to both campaigns, but he questions both parties’ loyalty to Black Americans.

While the majority of Black voters went with Hillary Clinton in 2016, President Trump picked up 14% of Black men but less than 2% of Black women.

The subject of Black men supporting the president has been controversial, with the hashtag #BlameBlackMen trending on Twitter earlier this week after rapper 50 Cent — who is opposed to Biden’s plan to raise taxes on the wealthy — posted the words “Vote for Trump” on social media.

“It’s difficult to say we're not monolithic. But when people exhibit behavior that is clearly, by definition, not monolithic, we shun them,” said political analyst Shermichael Singleton.

He’s since left the GOP but says data shows President Trump’s policies on the economy and criminal justice reform are resonating with some younger Black men.

“That Superbowl ad with Alice Johnson, believe it or not, they did focus groups on this stuff across the country that actually showed that there were Black men who said, 'You know what, I may not I like the guy, but this is something that is directly important to me,'” said Singleton.

“There is no good reason not to vote,” says a man in a Joe Biden advertisement.

The Biden camp released a series of ads targeting Black men and the president’s response to COVID-19.

“I am a lifelong Republican, and I’m still a Republican,” said former RNC Chairman Michael Steele.

Regardless, Black people and people in general seem to be enthused about this year’s election, with record numbers already casting their votes.  Amber Strong, Newsy, Northern, Virginia.