The Backlog At The Border May Affect Pre-Vetted Refugees. Here's Why 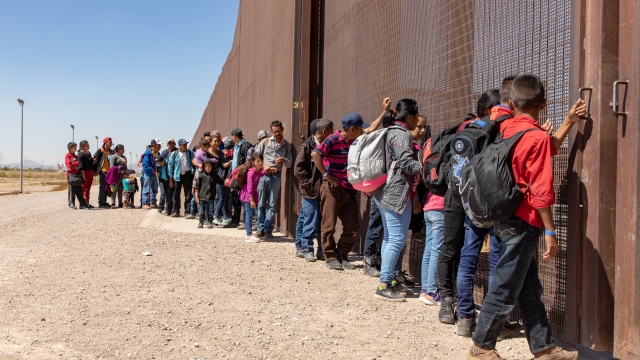 The White House is reportedly considering a sharp reduction in the number of refugees allowed in the U.S. every year. Right now, 30,000 refugees are allowed each year, but when you compare that to the backlog of hundreds of thousands of asylum seekers at the southern border, it seems really small.

That's because the cap isn't referring to that group of people. Asylum seekers are people who come to a U.S. border and apply for asylum there. Refugees are part of a different program. They don't apply for refugee status on their own, but are referred — often by the U.N. Refugee Agency. The referring agency selects the most vulnerable refugees who aren't safe in their home country or a neighboring country and vets them to make sure they haven't committed a serious crime.

Then the U.S. does six more background checks, and conducts three in-person interviews before the refugees can be admitted. If the U.S. chooses to admit them, they are then assigned to a non-government organization to help them acclimate to their new home and become self-sufficient. Last year the U.S. let in about 22,000 refugees through that program.

But that same year, 93,000 people sought asylum at the border. And the backlog of asylum cases has risen above 900,000 because it includes people who were already in the country but picked up by ICE.

Because of that strain on the immigration system, officials are discussing the idea of cutting the refugee program's cap by at least half. They're reportedly even floating the idea of not letting any refugees in at all, so case workers from that program can be used to process asylum claims. The deadline to set the new ceiling is Sept. 30.

A Human Rights Watch official responded to the idea, saying it would be "a travesty to walk away from a global duty of care, and a long held American value to care for refugees."