The Athletes Behind HBO's Mockumentary '7 Days In Hell' 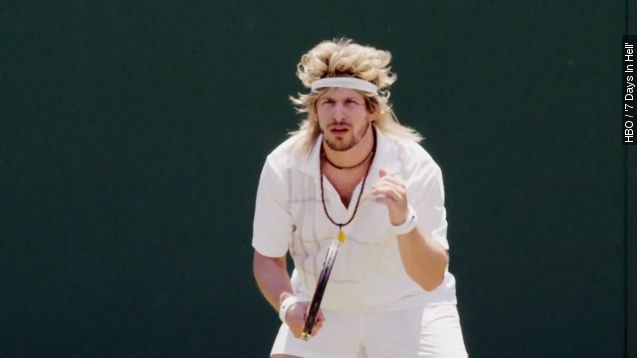 HBO's new mockumentary "7 Days in Hell" premieres Saturday and appears to make fun of some real-life tennis legends — as well as everything you would see in an ESPN "30 for 30" documentary.

So that got us thinking: which real-world athletes and events sparked the ideas behind the movie?

The seemingly never-ending tennis match is most likely a reference to the epic John Isner and Nicolas Mahut Wimbledon match in 2010 that set numerous of records and took three days to finish.

The characters in the mockumentary are Aaron Williams, played by "Brooklyn Nine-Nine"'s Andy Samberg, and Charles Poole, played by Kit Harrington aka Jon Snow in "Game of Thrones."

The characters themselves seem to be poking fun at two prominent tennis superstars.

Samberg's character is a brash American with a daring fashion sense along with hair worthy of making Axl Rose cringe.

Of course, former world number one Andre Agassi often received attention for his bold hair, controversial behavior and fashion choices on the court.

However, Harrington's character is the "chosen one" for British tennis, who faces tremendous pressure to win a Wimbledon title in front of a home crowd.

That brings Britain's own Andy Murray to mind. He played in and eventually won a Wimbledon final in front of an eager home crowd in 2013.

In an interview with Rolling Stone, Samberg admitted the characters are based off of some of the real world tennis stars mentioned above.

He also mentioned one of the film's biggest inspirations was the real HBO documentary "Fire and Ice" about the duels between tennis stars John McEnroe and Björn Borg.

The 42-minute long film will first air at 10:00 p.m. Saturday, but it is already available for streaming on HBO Go.