The Amazon Keeps Its Green Thanks To The Sahara Desert 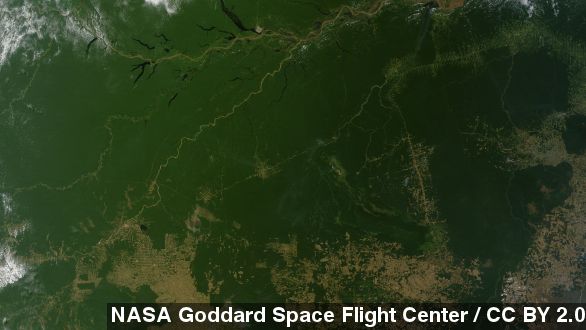 The Amazon rainforest owes at least some of its lush greenery to the Sahara Desert.

That’s according to a new study by NASA scientist Hongbin Yu and a team of researchers, who used satellite imagery to build the best look yet at how dust makes its way from the Sahara to the Amazon.

It uses a laser tool called Lidar to track clouds of aerosols, or airborne particles. This includes dust blown from the Sahara Desert, which is the largest such cloud the planet ever kicks up.

CALIPSO tracked a yearly average of 182 million tons of dust coming from the Sahara, which traveled 1,600 miles. More than 27 million tons of that dust makes it to the Amazon each year.

The phosphorous content of this dust is especially important. The researchers explain the Amazon’s soil lacks important nutrients, including phosphorus, because rain washes it away before plants have a chance to absorb it. (Video via National Geographic)

The phosphorus delivered in the Saharan dust offsets that washed away by rain. The researchers say without this dust, “the hydrological loss would greatly deplete the soil phosphorus reservoir over a time scale of decades or centuries.”

The researchers used six years of CALIPSO data to make their conclusions. But they say it still isn’t a large enough sample for reliable long-term models.

Earth itself is also skewing the data. A large band of semi-arid land at the southern edge of the Sahara called the Sahel also acts like a giant filter.

Lead author Hongbin Yu explains: “When the Sahel was dry, the dust transported to the Amazon the next year would increase. When it was wet, the transport would decrease.”

All the same, says Yu, CALIPSO’s data is an important first point for comparison in understanding how dust transport impacts global climate.

Yu and his team have published their findings in the journal Geophysical Research Letters.