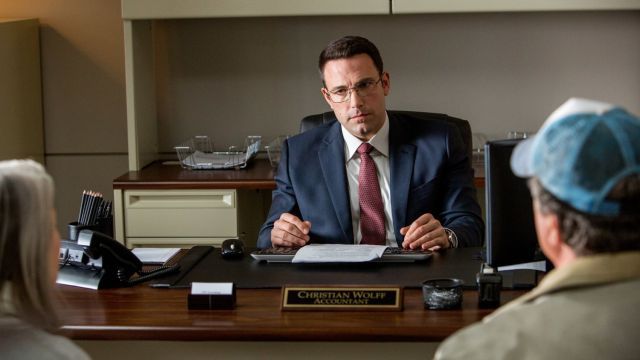 SMS
A Movie About Being An Accountant Manages $24M In Its Box Office Debut
By Jamal Andress
By Jamal Andress
October 16, 2016
Ben Affleck's "The Accountant" brings in almost $25 million, meanwhile Kevin Hart continues to be the hardest working man in show business.
SHOW TRANSCRIPT

Out of all the jobs you'd expect to be the subject of a multimillion dollar film, we didn't see this one coming.

Taking the No. 1 spot this week is Ben Affleck's "The Accountant," beating most analysts' box office expectations with a $24.7 million bow.

"He's a mathematical savant who is also like a deadly ninja and a crack shot, sure! Sure movie, why not?" What the Flick's Alonso Duralde said.

While critics all acknowledge plenty of flaws in this film, it looks like moviegoers are more than satisfied with the pocket-protector assassin.

Also, this film joins a very small list of movies at the box office that are truly original.

Aside from "Storks", "The Accountant" is the only movie playing nationwide that doesn't get its content from some previous source material, which is remarkably refreshing.

Taking the No. 2 spot this week is Kevin Hart's third theatrical stand-up release, "What Now" bringing in nearly $12 million. Now if it feels like you just saw Kevin Hart in a movie, it's because you did.

Three different movies, just this year. Hart has been a bunny on the run, Ice Cube's police partner and the Rock's mini-sidekick all in 2016. And it seems to be paying off.

This stand-up special is having a better debut than both "Let Me Explain" and "Laugh at My Pain."

Falling from No. 1 to take the third spot this week is "The Girl on the Train," with almost $12 million. It made an estimated $9,300 less than the Hart movie.

As for next week, Tom Cruise plays a government agent whose name is not Ethan Hunt.