The 2016 Presidential Race Has Some Pretty Old Candidates 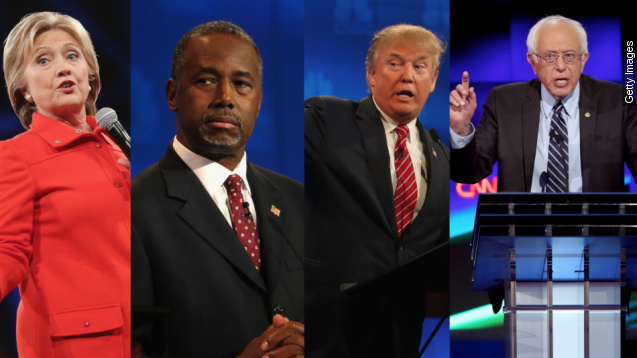 The already unconventional group of 2016 presidential candidates has another distinguishing factor: their age. The average age of president-elects in America is currently sitting at just under 55. But the average age of the 2016 candidates is four years older than that.

As a matter of fact, of the 19 people currently running for president, 16 would be the oldest president elected since 1992, when then President-elect Bill Clinton was 46 years old. The four highest polling candidates –– Hillary Clinton, Ben Carson, Donald Trump and Bernie Sanders all average at least a decade older than that. (Video via C-SPAN)

But does presidential age actually matter? Yes and no.

Some people equate youth with fresher ideas. And in an age when Washington, D.C.'s long-running volatile political climate is constantly on display, a candidate with a new way of doing things could find a lot of support at the ballot box.

And historically, younger voters tend to be more supportive of a younger candidate. But that might be changing. According to The Center for Information and Research on Civic Learning and Engagement, a survey in 2008 showed youth didn't say age was a major factor when casting their vote for president.

Our current field follows that trend, especially Bernie Sanders. As the oldest candidate, Sanders is doing great with younger voters thanks to his stance on issues like free college and equal rights. (Video via Bernie 2016)

In contrast, the youngest candidate, Louisiana Gov. Bobby Jindal, currently has a polling average of just 0.5 percent for the Republican nomination. So maybe age and experience are beating out youth this time. At least for now. (Video via Jindal for President)