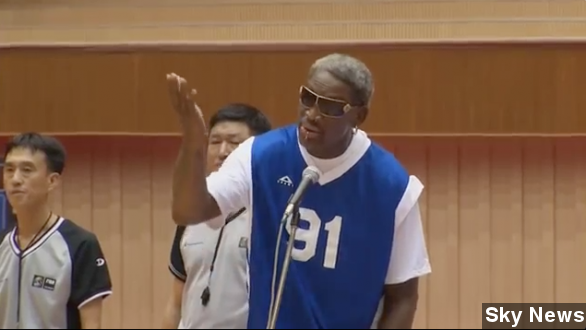 This odd solo happened just before an exhibition basketball game between a group of former NBA players and the North Korean team. It's all part of what Rodman's called "basketball diplomacy" with the country. (Via CBS)

Two weird things about that: One, no one knows exactly what birthday Kim is celebrating. And two, Rodman is one of the only people calling it "diplomacy."

This is the former player's fourth trip to the country and third time seeing Kim. And from the looks of it, the recent headlines don't seem to faze him. (Via USA Today)

Just a few weeks ago, Kim reportedly had his uncle executed. Even closer to home for Rodman and the U.S. team is the story of U.S. citizen Kenneth Bae, who's being held in North Korea on unclear charges. (Via ABC)

It's a topic many believe Rodman should use his unlikely friendship to fix. It's also what caused him to snap during a satellite interview with CNN's Chris Cuomo Tuesday. (Via The Wire)

Of course, Rodman viewed the game at Pyongyang stadium as a cultural exchange with the people in North Korea, not as a conduit for discussing Bae. (Via  ITN)

But not everyone on the team was as sure about the helpfulness of the game as Rodman. Former NBA player Charles D. Smith told Sky News, "I questioned whether we were doing the right thing because of the media scrutiny."

Though Rodman never said this trip was about Bae, he knows the situation. Bae's sister, Terri Chung, said in a statement that Rodman is actually making it worse and "hurling outrageous accusations" at Bae. (Via NBC)

​"He is clearly uninformed about Kenneth's case, and he is certainly not in any position to pass judgment on Kenneth Bae, who has never any hostile intentions against the DPRK." (Via ABC)

Adam is a video producer and graphic designer. But maybe more importantly, he's the office barista, a job he gladly accepts because he's always ready for another cup. He reads and reports tech/social media. He could easily write more than 140 characters on fonts. He's from Minnesoooota. But sorry, he doesn't have an accent. @amfalk