That Alpha Phi Video Looks A Lot Like Other Sorority Videos 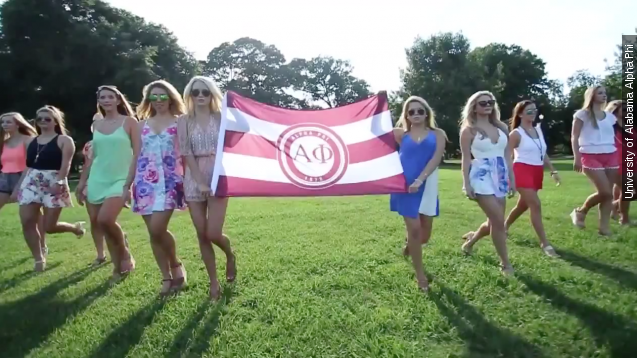 You know that University of Alabama Alpha Phi recruitment video everyone's talking about? And how it's been slammed for objectifying women?

The opinion article that set the whole thing off called the video "unempowering" and argued it would be difficult to take one of these women seriously in the future.

That may be. It features girls in bikinis laughing in groups and blowing glitter out of their hands, but here's the thing: It's like a lot of other sorority recruitment videos.

The recruitment video phenomenon might have started when the Baylor University Kappa Kappa Gamma chapter created the "Kappa Rap" music video in 2010.

And that song featured a line that said, "When a Kappa walks by, boys try to impress her."

While websites like Total Frat Move and Total Sorority Move publish headlines like "FSU's Delta Gamma Is The Hottest Sorority In The U.S." and "These Pi Phi's From ASU Are Probably Having More Fun Than You."

However you feel about the Alpha Phi video, these are essentially hype videos. By their nature and to stand out in the recruitment process, they get pretty ridiculous.

So what was it about the Alpha Phi video that struck a chord? The history behind both this sorority and the University of Alabama might've played a part.

For one, University of Alabama has had to deal with a PR nightmare after a 2014 student government decision struck down a bill that would essentially integrate Greek life on campus. The discussion started after one woman claimed to have been turned down by four sororities because of her race.

But even so, those scandals don't seem to have affected the 2015 recruitment class. In fact, this is the largest recruitment class in school history. More than 2,440 women went through the process in the hopes of receiving a bid to a house in the country's largest Greek life system.