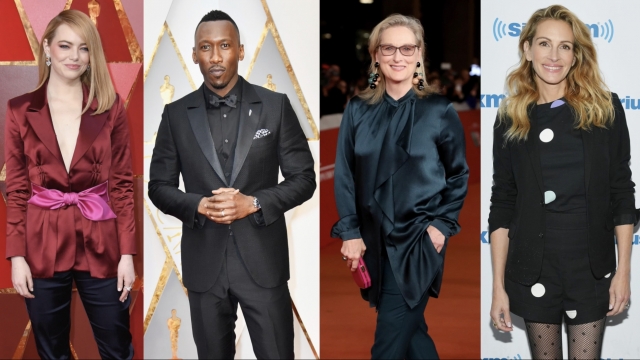 SMS
Thanks To A Changing Landscape, More Movie Stars Are Jumping To TV
By Katherine Biek
By Katherine Biek
August 2, 2019
Networks ordering more serialized shows, shorter seasons and more women behind the scenes on television sets may all be playing a part in the shift.
SHOW TRANSCRIPT

Emma Stone. Julia Roberts. Liam Neeson. Mahershala Ali. Meryl Streep. A Golden Age of Television has emerged over the last several years, thanks in part to these A-list actors and others abandoning their big Hollywood film sets for roles on the small screen.

It's a trend that was almost unthinkable a decade ago: Once someone landed their breakout film role, you rarely saw them return to their TV roots.

But an evolving television landscape has helped change the game.

One of the big reasons television roles might not have seemed appealing to movie actors up until five, 10 years ago has to do with the types of shows networks were ordering.

Back in the 1980s and '90s, episodic shows and sitcoms like "Friends," "MacGyver," "Miami Vice" and "Married With Children" made up almost 80% of programming on the broadcast networks.

These formats were perfect for a pre-streaming era, when people weren't able to catch up on episodes they missed after their initial airing.

But character development tends to take a backseat to the episode's plot in these types of shows, since the storyline has to be introduced and wrapped up in 22 to 40 minutes.

But when cable networks and then streaming services began investing heavily in original content, they packed their slates with serialized shows like "Game of Thrones" and "The Crown." Similar to a movie, these series have a continuous plot that unfolds over an entire season.

Not only are these narratives more complex, but they give actors more room to explore their characters.

The evolution in programming is paying off when it comes to viewer numbers. In 2018, eight of the top-10 time-shifted shows — or shows that had strong DVR playback viewing — were serialized dramas. Meanwhile, only one drama cracked the top-10 highest-grossing movies that same year.

Additionally, cable and streaming are offering shorter runs for their shows: often anywhere from seven to 13 episodes a season.

That's a much smaller time commitment for actors than a traditional 22-episode network season — which can take up to 10 months to shoot.

And finally, this last one revolves more around actresses, but studies have found that having a female director or writer attached to a project often results in more speaking roles for female characters. Now, the number of women working behind the scenes in both film and TV isn't great.

And there's soon going to be even more streamed programming in the mix as Disney, Apple and WarnerMedia get ready to launch their own streaming services — meaning we could continue to see big movie stars pop up on our small screens for years to come.