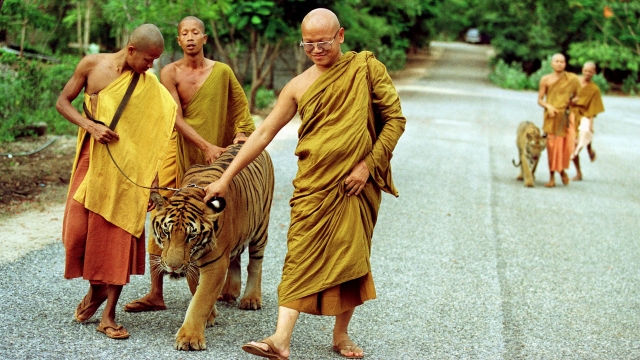 The temple, run by monks, has been accused of illegally trafficking the big cats.

A place in Thailand called "Tiger Temple" is losing the thing it's named for.

Police, military and wildlife-conservation officers showed up at the temple on Monday to remove the tigers.

Visitors could feed, pet and take photos with the big cats for a fee. Well, the problem is the temple wasn't allowed to profit from the tigers as part of a deal with the country's Wildlife Conservation Office.

The temple has faced allegations of illegal trafficking and mistreatment of animals in recent years, though officials deny it.

After a half-day standoff on Monday, monks freed some of the tigers to stall wildlife authorities.

Multiple media outlets reported more than 1,000 officials eventually started to sedate and move the animals. Authorities told NBC it would take at least a week to relocate the temple's 137 big cats.

The tigers will be moved to a wildlife refuge.

This video includes a clips from CNN and BBC and images from Getty Images.