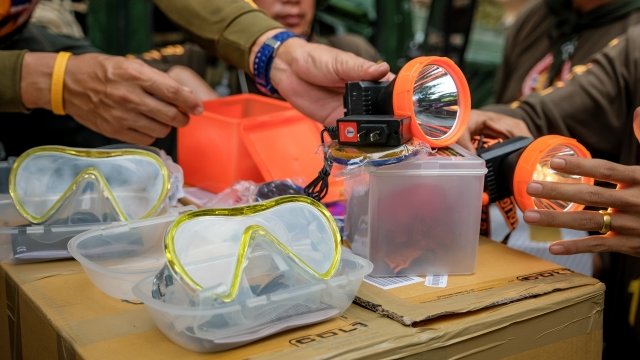 SMS
Boys Stuck In Thai Cave Reportedly Not Well Enough To Attempt Exit
By Ethan Weston
By Ethan Weston
July 5, 2018
Medical assessments of the 12 boys and their coach found it's too dangerous to try to move them out of the cave Thursday.
SHOW TRANSCRIPT

The 12 boys and their soccer coach who have been trapped in a cave in Thailand for nearly two weeks might have to wait a little longer to get out.

A Thai Navy SEAL told CNN that medical assessments of the 13 found it's too dangerous to try to move them out of the cave Thursday. A separate doctor's report found two of the boys and the coach were malnourished and exhausted.

Authorities are hoping to get the group out of the cave soon. But monsoon rains are expected to return this weekend, which could flood the caves further and possibly cut off the boys from supplies and communication for months.

Officials are still trying to figure out the best way to extract the boys from the cave. They've got a couple options, but none of them are perfect.

Rescuers are reportedly focusing on teaching the boys to scuba dive — some reportedly can't swim. The government is also trying to drain the cave system to make it easier for the boys to just walk out.

And rescue workers are looking for another entrance to the cave system in hopes of being able to bring them out.

CNN reports the rescue crew has begun to pump oxygen into the chamber where the team is trapped.