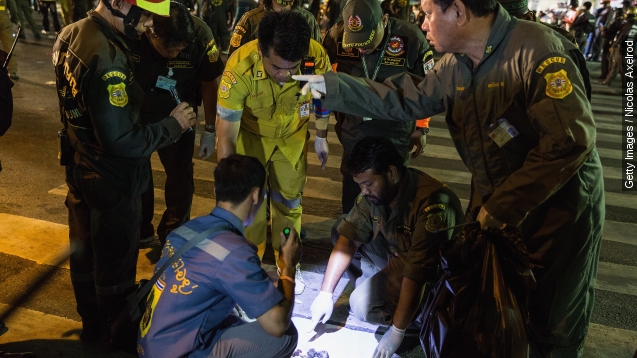 SMS
Thai Police Recover Bomb-Making Materials In Suspect Search
By Ryan Biek
By Ryan Biek
August 31, 2015
Officials believe the bombing near the Erawan Shrine was planned to be just the start of several attacks.
SHOW TRANSCRIPT

Thai police now believe the bombing near the Erawan Shrine in Bangkok was intended to be just the start of several similar attacks. (Video via Voice of America).

An arrest warrant was issued on Sunday for 26-year-old Thai national Wanna Suansan on the left and an unidentified foreign national suspect on the right.

When police raided the room Suansan was renting, they reportedly found bomb-making materials and 10 detonators.

But the Thai newspaper Khaosod quoted a police colonel saying they still have to analyze the materials to see if they were related to the shrine bombing.

On Saturday, Thai police arrested a foreign man in his apartment where police say they also found possible bomb equipment.

The suspect reportedly had dozens of forged passports, including a Turkish one, although the Turkish embassy said he is not a Turkish citizen.

Police say the the arrested suspect was not the shrine bomber, but they believe he was involved. The actual bombing suspect is seen on CCTV footage with, and then without, a backpack.