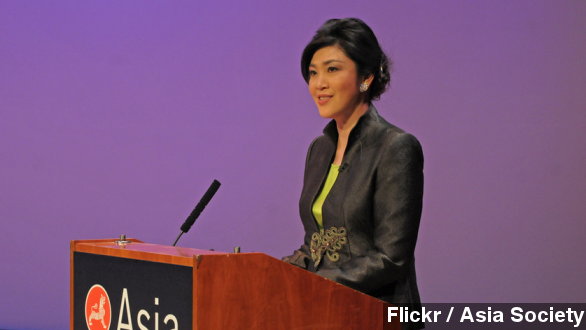 This ruling doesn’t come as a huge surprise. Anti-government protesters have been demanding her resignation since November. They want to overhaul Thai politics and replace Yinluck with an unelected "people's council." (Via ITN)

They accuse Yingluck of esentially being a puppet for her brother — former Prime Minister Thaksin Shinawatra. He now lives in self-imposed exile in Dubai to avoid jail time for corruption charges. (Via U.S. Department of Defense / Helene C. Stikkel)

In a bid to appease the protests, Yingluck called an election in February. A court later declared it invalid following deadly protests in the capital — she remained in office only as a caretaker prime minister with little authority. (Via Euronews)

Wednesday the nation's top court unanimously ruled  Yingluck acted illegally when she demoted the country's top security adviser back in 2011. She denies anywrongdoing. (Via Arirang)

A professor of political science in Bangkok tells Time the court’s ruling is proof of how politicized Thailand's judiciary has become: “In most other countries the sitting government has authority to make transfers of officials.”

While Bangkok's middle and upper class hailed the court's decision, observers warn it could trigger protests among Yingluck's supporters in rural Thailand.

As an expert on southeast Asia told The Guardian: "What is interesting is how such a bureaucratic, or intellectual, tactic will play with the rural communities of Thailand. They may see such a play as tricking them out of their chosen leaders."

It's not entirely clear what happens next. Yingluck still has to appear before the country's anti-corruption commission on charges relating to a failed rice subsidy scheme. (Via Channel 4)

Though one thing is for sure — the court's move is expected to prolong, not resolve Thailand's long-running political crisis. Yingluck's supporters have already called for a rally in Bangkok this weekend. Elections are scheduled for July.