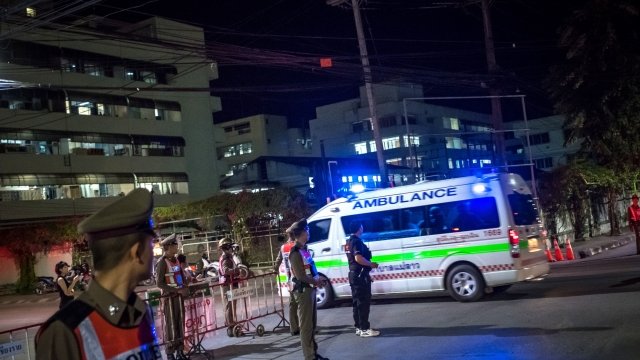 SMS
Thai Officials Release Video Of Soccer Players Recovering After Rescue
By Katherine Biek
By Katherine Biek
July 11, 2018
The hospital's director told reporters the soccer team would need to spend as many as 10 days in the hospital.
SHOW TRANSCRIPT

Thai officials released a video Wednesday showing some of the young soccer players who are now recovering in a hospital after being trapped inside a large cave system.

It's the first footage that's been shown of any of the team since the 12 players and their coach were rescued over the course of several days earlier this week. They'd been stuck inside the cave since June 23rd.

Since the team was not rescued all at once, they're recuperating at different rates.

Hospital officials said Wednesday that the first set of boys who were rescued were already eating solid food and taking less medication. Each boy reportedly lost about 4.5 pounds while trapped.

The entire team is still being quarantined until doctors are certain that they're free of infection.

The hospital's director told reporters the soccer team would need to spend as many as 10 days in the hospital. Afterwards, he said they'd have to continue recovering at home for about a month.