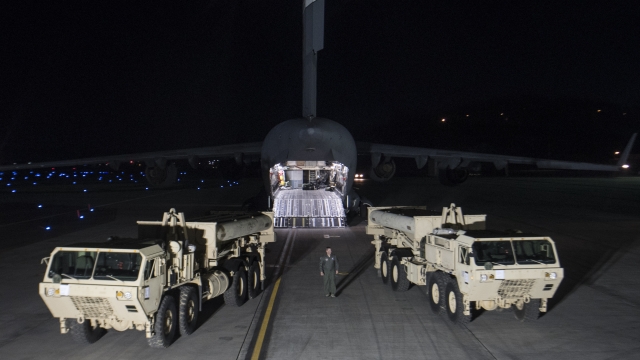 SMS
An American Missile Defense System Is Now Working In South Korea
By Ryan Biek
By Ryan Biek
May 2, 2017
The THAAD system can sense incoming missiles and shoot them down.
SHOW TRANSCRIPT

A state-of-the-art missile defense system, known as THAAD, is up and running in South Korea.

Its full name is the Terminal High Altitude Area Defense. It's an American-made system that can sense incoming North Korean missiles and shoot them out of the sky.

But while the THAAD system is advanced, it's not perfect.

The system isn't designed to stop multiple missiles at once, something North Korea tested in March.

And in the case of an incoming nuclear missile, experts worry that even if THAAD destroys it, harmful material could still rain down on the population.

The system has political side effects, too. Although it's a defense system, China has long called it a threat and urged the U.S. and South Korea to stop its use.

And not all South Koreans want it, either.

The country's presidential election takes place next week, and the leading candidate has promised to review the country's decision to accept the defense system.