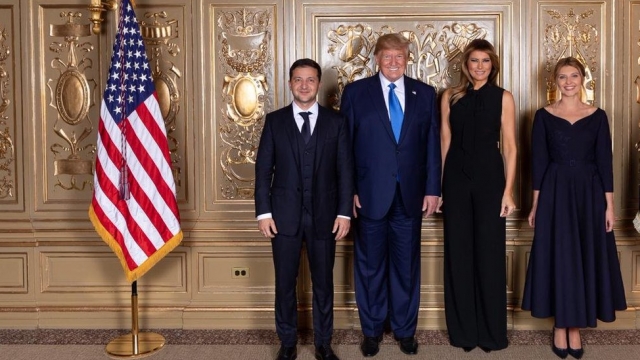 A trio of House committees released text messages that they say show "serious concerns" about the Trump administration's relationship with Ukraine.

State Department staff shared the messages with Congress as part of the impeachment investigation. There are a handful of key people involved: Kurt Volker, a former U.S. special representative for Ukraine negotiations; Gordon Sondland, U.S. ambassador to the European Union; William Taylor, acting head of the U.S. Embassy in Ukraine; and Andrey Yermak, an aide to Ukrainian President Volodymyr Zelenskyy.

The messages don't specifically mention Joe Biden or Hunter Biden, but they do talk about Burisma Holdings, where Hunter Biden was on the board of directors. And they also discuss the withheld Ukrainian aid money.

Before President Trump's July 25 phone call with Zelenskyy, Volker's text messages stressed the importance of Ukraine opening an investigation. And he directly tied that probe to a visit to the White House. The morning of the phone call, Volker told Yermak, Zelenskyy's aide, "Heard from White House - assuming President Z convinces trump he will investigate / 'get to the bottom of what happened' in 2016, we will nail down date for visit to Washington."

After the call, the Trump administration officials repeatedly discussed Zelenskyy making a public statement about the investigations, including the exact wording they wanted the Ukrainian leader to use. In an Aug. 13 text message, Volker suggested saying, "We intend to initiate and complete a transparent and unbiased investigation of all available facts and episodes, including those involving Burisma and the 2016 U.S. elections." Sondland responded with approval.

Text messages from Taylor appeared to express concerns about pushing Ukraine to open an investigation. On July 21, he texted Sondland and said, "President Zelenskyy is sensitive about Ukraine being taken seriously not merely as an instrument in Washington domestic, reelection politics."

The Trump administration has denied tying Ukraine's aid money to an investigation of the Bidens. But text messages from Taylor show that that was the impression he had. On Sept. 9, Taylor told Sondland, "I think it's crazy to withhold security assistance for help with a political campaign." Sondland disagreed and said the president was not pushing a "quid pro quo."

Even before these messages were made public, it was clear that President Trump wanted Ukraine to investigate the Bidens. And that probe is now happening — kind of. Ukraine's prosecutor general announced Friday that 15 high-profile cases were being re-examined, including the one involving Mykola Zlochevsky, the founder of Burisma Holdings.