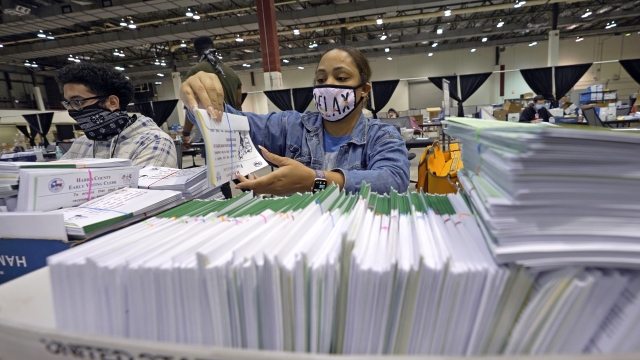 In the past, Texas has had one of the lowest voter turnout rates. But this year, Texans have cast 9 million ballots, surpassing total turnout in 2016.

Texas is historically one of the most restrictive states to vote in in the US.

But in a 'cost of voting' index report, the Lone Star state actually placed dead last in ease of voting.

SCHRAUFNAGEL: "So the two things that stick out in Texas, one is the voter registration deadline of a full 30 days before the election, that's the largest number of any state in the country.

In the past, Texas has had one of the lowest voter turnout rates. But this year, Texans already have cast 9 million ballots — surpassing total voter turnout in 2016.

In Harris County, which includes Houston, more than 1 million ballots have been cast early, an all-time early voting record and a larger total voter turnout than the city saw in 2010 and 2014.

Chris Hollins, the interim Harris County Clerk, has used the pandemic to dramatically expand the options for Houston voters.

HOLLINS: "I know that as a native Houstonian, you know that Houstonians love their cars."

For the first time, drive-thru voting is available, and nearly 10% of all in-person voters in Houston have cast their ballot from their car.

HOLLINS: “And so we're making it so that every single voter who wants to cast their vote from the safety and comfort of their vehicles, and so voters have responded to that."

Many of these changes have been met with pushback from Republican lawmakers. The Texas Supreme Court recently threw out a legal challenge that would have invalidated all the drive-thru votes in Harris County — more than 80,000 ballots.

That means Harris County, a county bigger than the state of Rhode Island, has one ballot drop-box location in the entire city.

HOLLINS: "The Republican Party here in Harris County, and in Texas, has sued my office at least a dozen times now, for efforts at making voting easier."

Gov Abbott didn't return our request for comment but he said on Twitter mail-in ballot voter fraud in Texas "must end."

According to KXAN in Dallas, 150 people have been charged with voter fraud in Texas since 2004. For reference, in 2016 alone, there were nearly 9 million votes cast in Texas.

The other states at the bottom of the 'cost of voting' index are Georgia, Missouri, Mississippi and Tennessee — all states with Republican leadership and large minority populations.

According to Schraufnagel, that's not a coincidence.

SCHRAUFNAGEL: "It's still not the case that all republican states are making it harder to vote. So for instance, Utah has mail-in voting, it's a Republican state. North Dakota as well. … So Republican alone doesn't appear to create a higher cost of voting. Because like, like states that with low African American populations that are Republican controlled voting is not that more not that difficult. It's the combination of the two things."

In preparation for election day, Harris County will be offering 24-hour voting on October 30th — the last day of early voting. This will be the first and only time 24 hour voting has been made available in the state of Texas.