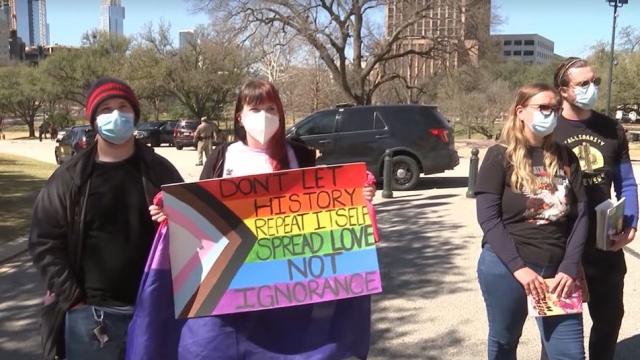 SMS
Texas Students Protest Proposed Book Bans At State Capitol
By Jamal Andress
By Jamal Andress
March 12, 2022
Hundreds of books have already been pulled from libraries across Texas for review, some over the objections of educators.

Saturday dozens of Texas teens gathered at the state capitol to rally against what they call government censorship.

"I live in a Texas where we read banned books no matter what anyone says," said Maya Mackey.

Maya Mackey is the president of Voters of Tomorrow Texas a group focused on representing young people at the polls and the state house. And her organization has recently turned its attention to books.

"Schools should be a place that's inclusive for everyone, and whether or not you want your child to read things that should not infringe on the right of another child to see themselves represented in their school and their libraries," Mackey said.

Over the past year, school districts across the state have begun pulling books off the shelves with parents complaining the material is 'pornographic' or teaches critical race theory.

One Texas lawmaker launched an investigation calling for Texas school districts to comb through their inventory looking for books that "make students feel discomfort, guilt, anguish."

The state representative provided a list of 850 books that primarily focus on race, sexuality and gender. It includes award winning titles like 'Between the World and Me' 'The Handmaid's Tale' and 'Tango Makes Three'

"Banned Book Clubs" have been popping up across the country specifically focused on gathering, reading and advocating for books like "Beloved" by Toni Morrison. One student in Katy ISD has handed out more than 600 books across the district. And he's brought that effort to the state Capitol.

Cameron Samuels is a senior at Seven Lakes High School, but they've spoken out across the district around censorship at school board meetings.

"It's been challenging at times to be one of the only students in the room, but we've gotten student involved and they're passionate about it and we're pushing forward," said Samuels.

Some books that have been targeted have seen a jump in sales. The graphic novel, 'Maus' about the effects of the Holocaust on a family hit the Amazon best seller list after it was banned by a Tennessee school board.