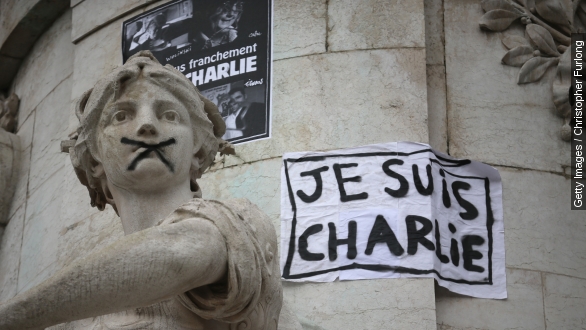 Depictions of the Prophet Muhammad might have been a possible cause of an attack on a convention center in Texas on Sunday.

Police in Garland killed two gunmen who opened fire on a security guard outside the convention center, which was hosting a competition to draw the prophet. (Video via KXAS)

ISIS has claimed responsibility for the attack, but former FBI official Tim Clemente told CNN, "They may have had email communication or read communications from ISIS, but I don't think they were directed by ISIS."

The group that put on the event — the American Freedom Defense Initiative — argued the event was an expression of free speech.

Freedom, even of offensive speech, is an issue that has been spotlighted by the January attacks on the offices of French satirical magazine Charlie Hebdo. (Video via BBC)

AFDI has attracted attention in the past for putting up anti-Islamic ads on public transportation and opposing the Park51 Islamic community center in New York. (Video via WCAU)

Those ads include language linking Islam to Adolf Hitler, and recent ads that caused controversy in New York depicted a militant saying, "Killing Jews is worship." (Video via NY1)

In all of these cases, including Sunday's prophet-drawing competition, the AFDI has argued it is only practicing free speech, and the courts have backed it up. (Video via Fox News)

AFDI co-founder Pamela Geller even reportedly linked her group's event Sunday to the January shootings, but there are some significant differences between the two organizations. (Video via Youtube / theunitedwest)

Charlie Hebdo satirizes all sorts of religious and political groups, but the AFDI has focused on Islam and perceives it as a threat. (Video via The New York Times, Jihad Watch)

While critics have called Charlie Hebdo insensitive and offensive, the AFDI has been labeled an anti-Muslim group by both the Southern Poverty Law Center and the Anti-Defamation League.

Nevertheless, the violence in both cases is sure to raise security concerns for other free-speech centered events, including the PEN American Center Gala on Tuesday in New York, where attendees will be honoring Charlie Hebdo. (Video via PEN America)