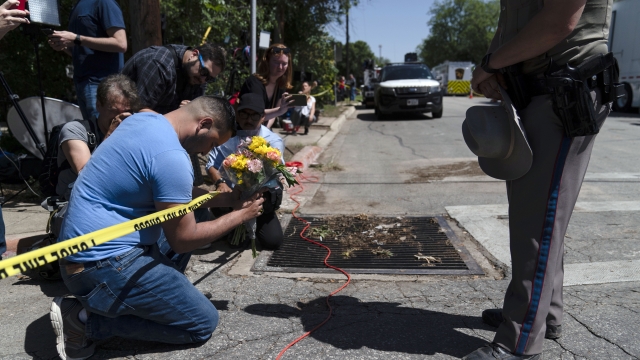 SMS
A Timeline Of The Elementary School Shooting In Uvalde, Texas
By Isbella Diaz
By Isbella Diaz
May 25, 2022
The next step is finding out why, and how, this tragedy could have occurred with nothing stopping the shooter in his destructive path.

A small community in south Texas has been shaken by a senseless act of violence.

Dozens of children have been left injured or dead after a gunman opened fire in an elementary school in the once quiet town of Uvalde, Texas.

That Tuesday started off just like any other school day. Students and staff at Robb Elementary were gearing up for summer break, which was just two days away.

But in a home just two miles off, a violent scene was unfolding.

As investigators continue to figure out what happened, here's what we know.

Just days after his 18th birthday on May 16, Salvador Ramos legally bought two AR-platform rifles from a licensed gun dealer, as well as 375 rounds of ammo.

About 30 minutes before the shooting on Tuesday morning, he sent three private messages, according to officials with Facebook's parent company, Meta. In those messages, he made threats against his grandmother and an unidentified elementary school.

Around this time is when officials say Ramos shot his grandmother in the face outside her home. Texas' Department of Public Safety says neighbors saw her and called the police.

By this time, the gunman had already fled in his truck, then crashed just outside Robb Elementary.

Ramos was able to enter the school, armed with an AR-15 rifle and tactical gear. Police say he dropped a backpack with several magazines of ammunition just outside the school.

Once inside, the shooter exchanged fire with two Uvalde officers who were outside, wounding both.

Family members report that's when students heard pops and a bullet shattered a window. A teacher shouted she saw a gun, but was left with no time to react. The shooter then entered a nearby classroom.

"The gunman was able to make entry into a classroom, barricade himself inside that classroom and then that's when he just — he started shooting children and the teachers," Texas Public Safety Dept. Lt. Chris Olivarez said.

Officials say officers broke windows to pull out and save children and teachers in the school as they waited for a tactical team to arrive.

That team converged on the classroom with the gunman, where some reports indicate he was then shot and killed by a border patrol officer. He had killed 19 children and two teachers.

The next step is finding out why, and how, this tragedy could have occurred with nothing stopping the shooter in his destructive path.

"There's limited information. We don't see a motive or catalyst right now. Looking for it, scouring. And we'll continue to do so," Texas Public Safety Dept. Steven McCraw said.

Texas Gov. Greg Abbott says the gunman was a high school dropout but had no criminal record and no known history of mental illness.

And as law enforcement tries to put the pieces together, a tight-knit community of just 16,000 tries to pick up the pieces.