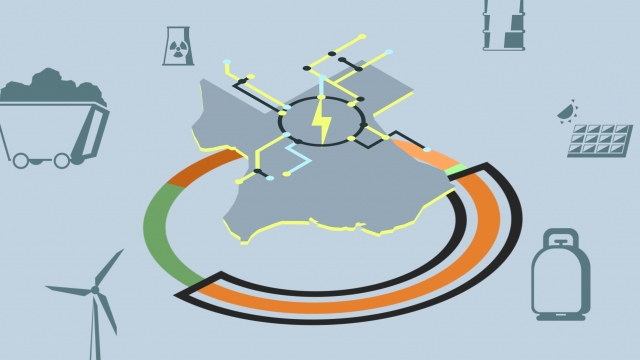 A deadly winter storm plunged much of Texas into a deep freeze that left millions in the state without power and running water — some for several days.

"We lost power yesterday morning," Chissell Porreca, a Richmond, Texas resident said last month amid the storm. "Today, when we got up, there was no water."

Nearly a month after the crisis, Texas is rethinking its energy system, with a flurry of investigations underway into the state's preparation and response to the storm.

"We're really seeing in Texas this convergence of the climate crisis that's bringing on more extreme weather events colliding with kind of disinvestments in our country's infrastructure and power grids," explained Marcela Mulholland, political director at Data for Progress, a left-leaning polling and research group where she works on issues related to climate change and the environment.

One solution being floated by climate activists, like Marcela Mulholland: A Green New Deal, a set of proposals aimed at tackling climate change by transitioning the nation's energy system from coal, oil, natural gas and nuclear power to 100% clean, renewable energy — while creating millions of jobs and reducing economic inequality along the way.

"We gathered our partners in Texas, created mutual aid networks, and also got folks on the ground to tell stories of what a Green New Deal would mean for them," John Paul Mejia, a climate activist and spokesperson for Sunrise Movement, a youth-led organization working to stop climate change.

"We are demanding an overhaul of our broken energy grid to make it 100% renewable," an activist with Sunrise Movement said last month at a rally outside the Texas Capitol.

The sweeping plan is bold and comes with a trillion dollar price tag. It faces an uphill battle in Texas, a state dominated by Republican and conservative lawmakers who have long opposed green energy policies and even modest costs to mitigate the threat of climate change.

Many Republicans say the plan would lead to job losses in the energy sector, hurt the economy by raising taxes and, ultimately, wouldn't make much of a difference without support from China, the world's biggest coal consumer.

"This shows how the Green New Deal would be a deadly deal for the United States of America," Gov. Greg Abbot, R-Texas, told Fox News amid the crisis.

For the record, there is no Green New Deal in Texas or anywhere else in the U.S., nor has there ever been, and experts say the outages were largely tied to the state's deregulated energy grid and its lack of winter preparation.

"There was also a failure within the natural gas supply chain to some degree that's not fully known, in terms of freezing components, making the stations inoperable at least for some time period, if not for a day," explained Carey W. King, a research scientist and assistant director at the Energy Institute at the University of Texas at Austin.

Texas is the only state in the continental U.S. that mostly relies on its own power grid. About 47% of its energy comes from natural gas, 20% from wind, 20% from coal, 11% from nuclear and 1% from solar.

For now, Texas — and other states for that matter — remain far from passing any version of the Green New Deal, or even using more renewable energy, but activists hope the latest crisis will serve as a catalyst for change.

"I hope that this situation is a learning lesson and builds political momentum to the kinds of changes that we need," Mulholland said.