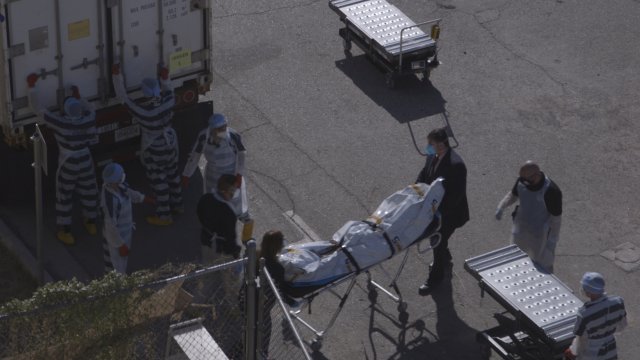 SMS
El Paso Jail Inmates Paid $2 Per Hour To Assist With COVID
By Jamal Andress
By Jamal Andress
November 18, 2020
As El Paso, Texas deals with one of the worst COVID outbreaks in the country, the local county is using volunteer inmates to help manage dead bodies.
SHOW TRANSCRIPT

El Paso County has requested the Texas National Guard mobilize to assist with the growing coronavirus crisis, including moving bodies to mobile morgues. But there’s one problem: There's no timetable for when help will arrive.

The county sheriff’s office told Newsy that inmates are helping out in the interim. Those inmates are being paid $2 an hour.

While officials wouldn't disclose all the work these inmates are doing, this is exclusive video of those inmates loading bodies into "mobile morgue" trailers.

Krish Gundu is the executive director and co-founder of the inmate advocacy group Texas Jail Project.

"We have a callous disregard for human life. ... We think it's OK to put them in these risky situations, while at the same time denying them access to testing and medical care and free phone calls with their families," Krish Gundu said.

The El Paso County Sheriff’s Office told Newsy in an email this program is "100% voluntary" and that the $2 per hour figure is "simply the higher end of average pay per jail trustee across the country."

According to the Prison Policy Initiative, average pay for inmates across the country ranges from 14 cents to $1.41 per hour, depending on the state and the nature of the job.

"Is this what you would pay an essential worker who would be doing the job if you didn't have an inmate to do the job?" said Gundu. "I mean, why the difference? If you're treating them as if you're making them do essential work, are they going to have access to the vaccines when they come on? Are they going to be one of the first people to get those vaccines? There is no equity in that conversation."

And while some El Paso County commissioners voiced objections to the $2 wage, a motion to pay the workers more money failed to gain traction.

"It just seems illogical for them to pay $12 an hour for folks who are in the jail as inmates when folks outside the jail are gonna want that opportunity," said El Paso County Precinct 3 Commissioner Vincent Perez.

At the moment, El Paso is experiencing one of the worst outbreaks in Texas. More than 1,100 people are hospitalized in the county, and one in six COVID hospitalizations in the state are in El Paso.