Texas Home Sliding Off Cliff Goes Down In Flames 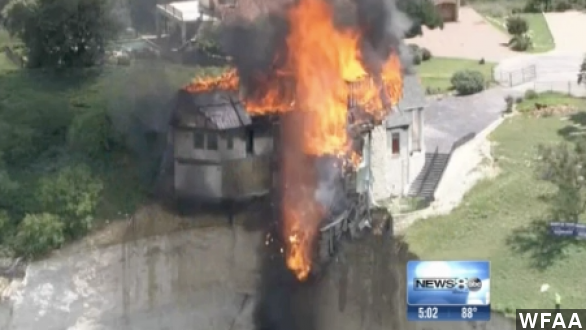 SMS
Texas Home Sliding Off Cliff Goes Down In Flames

By Ben Lawson
June 13, 2014
Officials decided it was best to burn down the Texas home after the ground beneath it gave way, causing the house to slide off a cliff.
SHOW TRANSCRIPT

You think you're having an unlucky Friday the 13th? Well, how would you like to watch your burning house fall off a cliff on national television?

That’s what Robert and Denise Webb did Friday. City authorities in Hill County, Texas set their home on fire because it was dangling off the edge of a cliff. Earlier in the week, a chunk of the cliff fell into the lake right below their house. (Via KYTX)

"You know that's my life there that we're watching fall off." ​The Webbs left their home and have been staying in an apartment in Florida for weeks after city officials noticed cracks in the ground around their property. (Via WTSP)

City officials decided setting the house on fire would ultimately lessen the amount of debris.

The home was valued at $700,000 but the Webb's estimate that it's closer to $1 million. Unfortunately their insurance policy does not cover geological shifts like the one that caused their house to teeter on the edge. (Via WFAA)

Cost was a major factor for the Webbs choosing to set the house ablaze. KTVT reports that the homeowners are responsible for clean up. Cleaning up the lesser, charred debris would cost about $50,000.

Which is much less than the $200,000 the Webbs would've had to cough up for the city to clean all the unburnt debris from the lake.