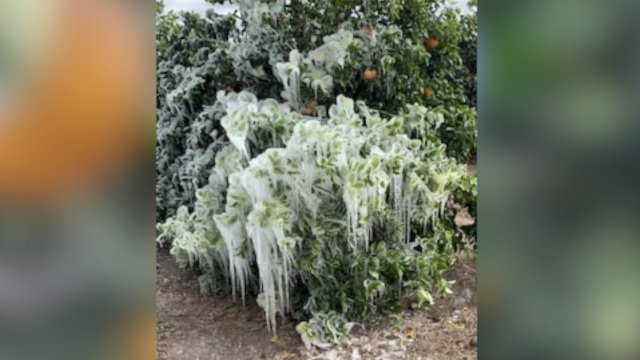 Citrus crops, cattle under pressure in Texas after record cold weather, with estimated losses of hundreds of millions of dollars.

"We've had over 50 hours of below freezing here."

Murden, who is the president of Texas Citrus Mutual, said his trees can't handle temperatures that dip into the teens. His organization says initial estimates show $300 million in damage — that's just for citrus growers in three Texas counties — is a long-term thing.

"You plant a tree and it's five years before you use the fruit in any income. So you've got a lot of expense going into it for for quite a while before you start to realize an income," he said.

Texas is also number one in cattle production. But the cold forced some dairy farmers to dump milk. Some cattle were lost because the water was frozen and they couldn't graze because of the snow and ice on the ground.

Gary Joiner: "Some of those animals will be held on longer. Some of those opportunities to market those animals that were planned for will be delayed. And those producers and those entities that we're counting on that will have to adjust."

Anderson: "One of the things you have to do is you got to keep the chickens warm. And so they were running their heaters in the houses and see some of those certainly higher costs of fuel."

The weather is a reminder of the harsh, economic realities farmers are facing in a tough year. Murden says he's been hurt by the pandemic.

Murden: "Our exports had come to a screeching halt because the European Union had placed some tariffs on us, and it made us almost impossible for us to ship fruit to Europe. So, yeah, there's there's there's a lot of other things at play from drought to hurricanes to freezes to trade wars pandemic. It's been a wild 11 months, Austin."

All this happening, as bankruptcy filings remain high for farmers across the country. Amid the financial strain some may leave, but others – like Murden – will try to overcome these losses.

Anderson: "We get some extreme events like this, that sort of piles on effects. And so I think that is a concern. Yet, oftentimes we do have people enter and exit the business. But going forward that's often a concern about people:  How do we how do we get through this disaster financially? Because it is a financial burden for many people."