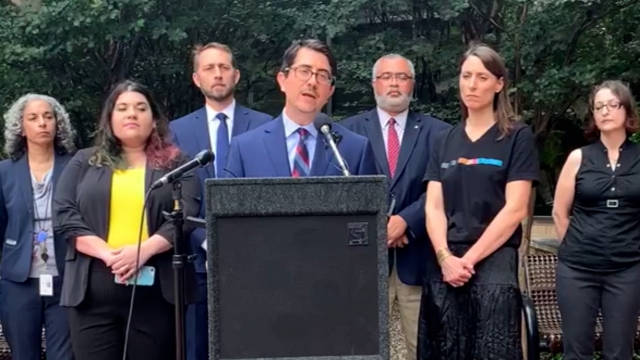 Travis County, Texas, officials have settled a lawsuit and agreed to make sweeping reforms in the way rape allegations are handled and prosecuted from now on.

"The days of people who have experienced sexual assault not being believed — or being treated badly when they come forward and file charges — are over," said Travis County Commissioner Brigid Shea.

"Most of all I am grateful to survivors. Because of their courage and determination, we are undertaking significant reforms in the district attorney’s office," Garza said.

The settlement and agreed upon reforms are the latest part of sweeping changes that followed the joint Newsy, Reveal and Propublica "Case Cleared" investigation.

The series revealed many police agencies nationally were making it appear as if they had solved a significant share of their rape cases, when they simply closed them without making an arrest.

The departments were using a loophole in an older FBI crime reporting system which did not at the time require departments to disclose to the FBI whether or not a crime the police reported as solved to the FBI came with an arrest or not.   When large numbers of rapes were reported as "cleared" to the FBI, police departments looked more effective to the public while leaving suspects on the streets.

Marina Garrett's rape was reported as cleared to the FBI and Austin city council, even while a criminal case against the known suspect never moved forward.

"It was in these numbers to make it look like that they had caught my rapist, that I had healed, that I got justice. I had no idea that that happened. And so it was just kind of adding to the trauma all over again," she said.

In Austin, police reported solving about half of their rape cases in 2016. The joint investigation revealed that two thirds of those cleared cases were closed without making an arrest or prosecution.

Liz Donegan, the former head of sex crimes investigations for Austin police, said she was ordered to take advantage of the loophole and reclassify stalled rape investigations, as cleared.

"It’s not truthful and I think it gives the appearance we’re able to clear more of these rapes than we actually are," she said.

The news report's findings became evidence in the lawsuit that just settled.

The county has agreed in the settlement to apologize to each survivor and implement a series of reforms in the district attorney's office going forward, including meeting personally with every new rape survivor before declining or rejecting their case. Prosecutors will also receive new training intended to teach best practices in presenting harder cases to juries.

A recent check of the latest crime numbers shows that after our "Case Cleared" news stories and a subsequent state audit, the Austin police department's clearance rate for rape plummeted to only 15%, revealing a far more accurate accounting of how many rapes went unsolved.

The Austin police department and city of Austin have not settled and continue to fight the allegations from survivors in court. A spokesperson for APD did not comment on the drop in rape clearance numbers, but did say analyzing the drop would be a "complex request," citing "issues related to our data systems, recent migration of our business intelligence tools" and a shift to an updated FBI crime reporting system.

The county agreed to pay a total of $280,000 to 14 survivors who sued, allowing for them to each received $20,000 in compensation. Plaintiff attorneys say payments to survivors who sued in a case like this creates a new national precedent.

"As far as we know, this is the first and only settlement in the country where district attorneys and the county officials have paid sexual assault victims for their failure to give those victims access to justice," said plaintiff's lawyer Elizabeth Myers.

Survivor Marina Garrett plans to use her settlement money to attend law school, where she hopes to get even better at helping others and fighting injustice.

Garrett says she'll continue to help the survivors' ongoing case against the city of Austin and the Austin police department.

"It is not done by a lot. Yeah, we still have so much work to do with the city."