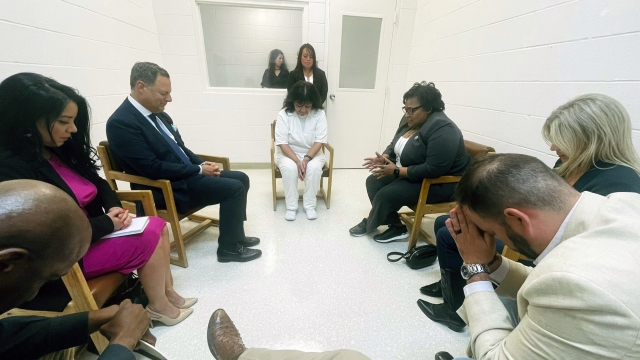 Following rallies in Texas and pressure from a rare bipartisan coalition, the execution of Melissa Lucio has been delayed.

Texas' highest criminal court issued a stay in Lucio's case so a lower court can review new evidence — evidence Lucio and her supporters say exonerates her.

"If it had not been for the state's use of false testimony, no juror would have voted to convict Melissa of capital murder because no murder occurred," her attorney Vanessa Potkin said.

In 2008, Lucio was convicted of murder for the death of her 2-year-old daughter Mariah, who prosecutors say she beat to death.

Lucio says her daughter fell down a flight of stairs and that severe fall is what killed her. An autopsy found blunt force trauma as the cause of death.

But in the months leading up to her execution, which was scheduled for Wednesday, more and more people began to speak out on her behalf — from Lucio’s family to several members of the jury that convicted her.

In its motion for appeal, Lucio’s defense offers several problems with the case.

Defense attorneys claim the prosecutor who handled Lucio’s case withheld crucial evidence, plus he was convicted of federal bribery charges just a few years later in an unrelated case.

The defense also claims law enforcement coerced a false confession from Lucio — which some experts say is more common than you might think.

Ngozi Ndulue is the deputy director at the Death Penalty Information Center — a nonprofit organization working to inform the media and public about issues concerning capital punishment.

"Oftentimes people just kind of get broken down" during interrogation, Ndulue said. "We found that 16% of exonerees had falsely confessed, and those numbers get even higher when you're talking about vulnerable groups."

In a statement to Newsy, the chair of the Texas House Criminal Justice Committee said, "Melissa's case is the most troubling I have ever seen. The system literally failed her at every turn."

In a reaction to the decision, Lucio said in a statement, "I thank God for my life ... I am grateful the court has given me the chance to live and prove my innocence. Mariah is in my heart today and always."