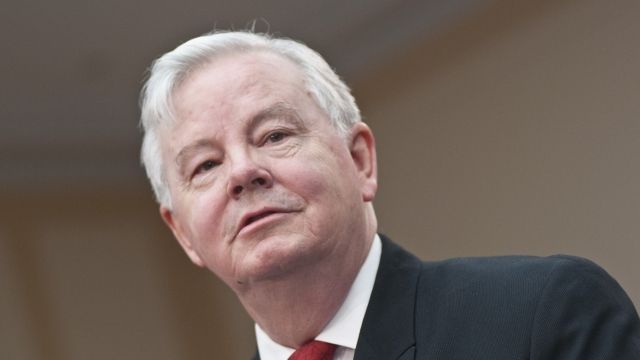 SMS
Texas Congressman Tells Town Hall Attendee To 'Shut Up'
By Briana Koeneman
By Briana Koeneman
March 15, 2017
Rep. Joe Barton lost his cool while responding to a question about why he had not supported legislation that would combat violence against women.
SHOW TRANSCRIPT

That was Barton at a town hall meeting last week.

The Republican congressman was responding to a question about why he had not supported legislation that would combat violence against women.

But when some audience members started to argue against his reasoning, Barton eventually lost his cool — that's when he said, "Shut up."

Trump Jokes He Could 'Destroy Career' Of Texas State Senator

Several attendees weren't too happy with his reaction.

"What is this? You don't tell anybody to shut up! You work for us!" one attendee said.

Later, some attendees shared their anger on social media.

But Barton defended his vote when questioned about the incident on MSNBC.

In a statement to several media outlets, he said, "All town halls begin with ground rules, which include that you must be recognized in order to speak."

Barton also told The Dallas Morning News he appreciates "the interest and participation" at every town hall he hosts.