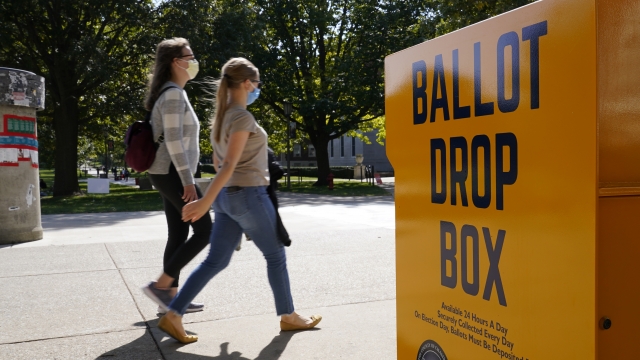 SMS
Texas Cannot Limit Ballot Boxes To One Per County, Appeals Court Rules
By Bailey Vogt
By Bailey Vogt
October 24, 2020
The court ruled having one drop off box per county could increase the spread of COVID-19 and impede voting rights.
SHOW TRANSCRIPT

An appeals court ruled Friday that Texas cannot limit its mail-in ballot drop off boxes to one per county regardless of population.

The court unanimously sided with the lower court's ruling. It said having one drop off box per county could increase the spread of COVID-19 and impeded on voting rights.

Shortly after the ruling, Texas Gov. Greg Abbott said he plans to appeal it to the state's supreme court — potentially preventing extra ballot boxes from being deployed.

Under Abbott's policy, Harris County - home to Houston and 2.3 million registered voters - would have the same number of ballot drop boxes as rural Loving County, with just 121 voters.

President Trump has repeatedly criticized mail-in ballots as corrupt, without any evidence.

Despite President Trump carrying Texas by nine percentage points in 2016 — polls show that gap closing, with some showing a long shot win for the president's opponent, Joe Biden.