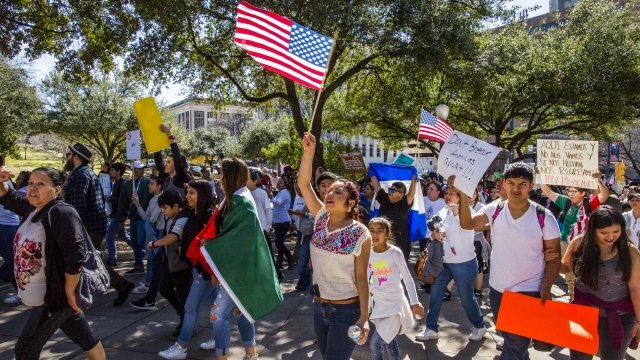 President Donald Trump is having some trouble getting his crackdown on so-called sanctuary cities off the ground ... for now. On Wednesday, a district judge blocked key parts of Senate Bill 4 in Texas, which some say is the toughest law of its kind.

Before we get into the details of the case, here's a refresher on what a "sanctuary city" is. The designation isn't actually a legal term; it's pretty loosely defined to cover any place that doesn't necessarily enforce federal immigration laws or turn over undocumented immigrants to federal agencies.

It's not completely clear how many jurisdictions fit that description, but the estimates land anywhere from 300-500.

Now back to Texas. Gov. Greg Abbott signed SB-4 in May. The law largely stops cities and counties from getting that "sanctuary" designation. Some of the pieces of that law are pretty controversial with immigration advocates.

And a district judge sided with them by issuing a preliminary injunction on SB-4 while a lawsuit involving some of the state's largest cities, which are upset about the law, moves forward. The judge said parts of the legislation might be found unconstitutional.

Under SB-4, officials who don't help federal agencies with immigration enforcement could be fined up to $25,500, be arrested and put in jail for up to a year, or lose their jobs.

It would let law enforcement ask about immigration status during regular traffic stops. It would also force local officials to hand over undocumented immigrants to federal agencies after they're released from local custody.

Immigration advocates are obviously praising the judge's decision. They argue SB-4 would legalize racial profiling of Latinos, even though a provision in the law prohibits that.

Abbott released a statement saying the decision would make "Texas' communities less safe" and would leave "gang members and dangers criminals ... free to prey upon our communities." Texas is expected to appeal the judge's injunction immediately.