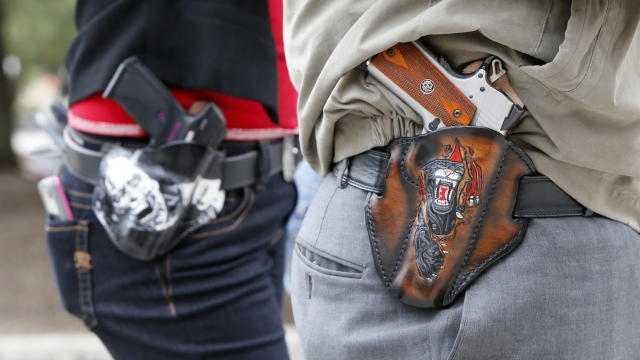 SMS
Texas Bill Would Let People Carry Handguns After Natural Disasters
By Katherine Biek
By Katherine Biek
May 28, 2019
Under the bill, people could temporarily carry a handgun without a license for up to seven days after a natural disaster.
SHOW TRANSCRIPT

Texas lawmakers narrowly passed a bill Sunday that would allow people in the state to carry their handguns for up to a week after a natural disaster.

Texans currently have to pass a training course, background check and shooting test if they want to carry a handgun in public, either openly or concealed. But they're still prohibited from carrying a firearm in certain locations like schools, hospitals, churches and government court buildings.

But House Bill 1177 would revise the state's gun laws to allow people to temporarily carry their handguns without a license so long as a state or natural disaster has been declared and they're complying with an evacuation order.

The bill would also allow people to carry their handguns into any building set up as a designated emergency shelter if the person operating it signs off. The only Texans who would be exempt under the bill's language would be those who are prohibited by state or federal law from owning a gun.

Supporters of the bill say it would "provide clarity for lawful gun owners" and also prevent the weapons from falling into the hands of looters.

Almost $1 million worth of merchandise was stolen from Houston-area stores after Hurricane Harvey made landfall in August 2017 — including more than 100 firearms from gun stores. And following 2005's Hurricane Katrina, thieves reportedly stole more than 1,000 guns. And those numbers don't count how many firearms were potentially stolen from people's homes after they evacuated.

Texas Gov. Greg Abbott still needs to sign the bill for it to go into law. If he does, the bill is scheduled to take effect in September.