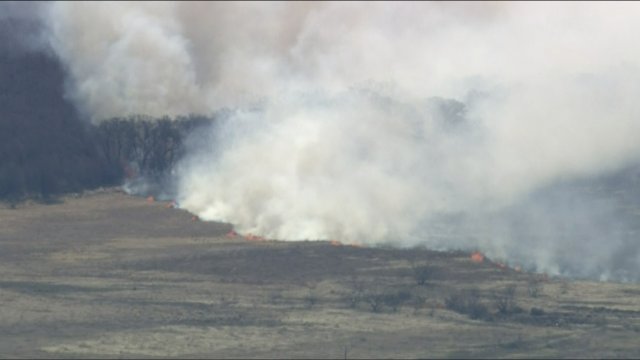 Strengthened by drought conditions, the fires merged to form what officials call a "complex" that was burning near Eastland, about 120 miles west of Dallas. Hundreds of homes were evacuated in smaller communities.

Officials in Eastland County reported the death of a sheriff's deputy, Barbara Fenley, who they said was trying to save people from the fires. It's unclear how or when she died. No other casualties have been reported.

As of Friday afternoon, the fires had burned about 70.9 square miles, according to Texas A&M Forest Service. It was only 4% contained and fires were burning in thick brush and grass fields.

About 18,000 people live in Eastland County. About 475 homes were evacuated in the town of Gorman, but officials don't yet know how many structures may have burned, said Matthew Ford, spokesman for Texas A&M Forest Service.

"Until we get more boots on the ground, we don't have an estimate" of the numbers, Ford said Friday morning. "Our top priority is life, safety and protection of structures."

The forest service warned that the "rare, high impact wildfire phenomenon" could also affect parts of Oklahoma and Kansas. Nebraska's forest service said most of the state would spend the weekend under extreme fire risk because of drought conditions.

Several months of dry, windy weather have fueled deadly wildfires in Kansas and Oklahoma, including one a few weeks ago. In remote, western Nebraska ranching country, a large wildfire has been burning for several days. Meteorologists said they were hopeful that rain showers expected early next week across the Plains would reduce the risk.

"We've been so dry that even an inch of rain would make a difference," said Robb Lawson, a National Weather Service meteorologist in Wichita, Kansas.

Smaller fires were burning in other parts of Texas, and Thursday's low humidity and high winds created an ideal scenario for the blazes to quickly grow out of control. Texas A&M Forest Service had warned of a wildfire outbreak this week because of the forecast.

A nursing home in Rising Star was evacuated and residents were taken to a community center, Eastland County Today reported.

The National Weather Service in Fort Worth warned Friday that much of western and central Texas faces an elevated fire risk due to gusty winds and drought conditions. The weather service urged residents to check for local burn bans and use caution with anything that could start a grass fire.

"We had a fairly dry summer last year and that continued into the fall and winter," said National Weather Service meteorologist Madison Gordon. With winter passing, "we now have a lot of fuel available in fields."

A Baptist church in downtown Ranger, Texas, about 85 miles west of Fort Worth, was destroyed Thursday when flames engulfed the 103-year-old building. The police department and other historic buildings were also burned, Dallas TV station WFAA reported.

Roy Rodgers, a deacon at Second Baptist Church, said the third floor and roof collapsed and the rest of the building had extensive smoke and water damage. Rodgers said the church plans to hold its next Sunday service in a parking lot across the street, where the congregation will decide what to do.

"It's heartbreaking," said Rodgers, a church member since 1969. "A lot of people are taking it pretty hard because a lot of people have ties to the church."

The fire, which was fueled by high winds, may have started from a barbecue pit, Ranger Fire Department Chief Darrell Fox said.

"We had everything ready throughout the county," Fox said. "But when we have the winds like there was ... and the humidity down to nothing, this is what you're going to get."

The fires caused hazy conditions hundreds of miles away, with the Houston Fire Department and the city's Office of Emergency Management on Friday morning sending out automated phone messages alerting area residents to smoke and ash.