Testimony Wraps Up In Hate Crimes Trial Over Arbery Killing 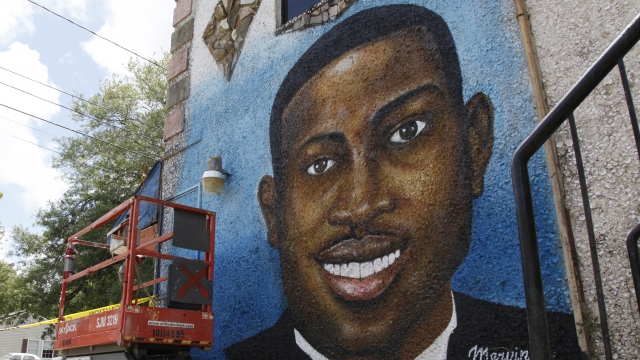 Witness testimony concluded Friday in the hate crimes trial of three men convicted of murdering Ahmaud Arbery with final prosecution witnesses saying they heard two of the defendants make racist statements, including crude sexual remarks directed at a woman who had dated a Black man.

After federal prosecutors rested their case, defense attorneys followed suit after calling a single witness: a neighbor of the accused men whose testimony suggested that a man two of the defendants reported to police as suspicious in 2019 was likely White.

U.S. District Court Judge Lisa Godbey Wood excused the jury for the weekend and scheduled closing arguments for Monday, which will mark one week since the trial began.

Father and son Greg and Travis McMichael armed themselves and chased Arbery in a pickup truck two years ago after spotting the 25-year-old Black man running in their coastal Georgia subdivision. A neighbor, William "Roddie" Bryan, recorded cellphone video of Travis McMichael blasting Arbery with a shotgun.

All three men were convicted of murder last fall in a Georgia state court. They're now standing trial in a separate case in federal court, charged with violating Arbery's civil rights and targeting him because he was Black. The McMichaels and Bryan have pleaded not guilty.

A woman who served under Travis McMichael in the U.S. Coast Guard a decade ago testified Friday that he made crass jokes mocking "that I had been sexually active with an African American man" when he learned that she had previously dated a Black man.

"He called me an N-word lover," Kristie Ronquille told the jury, saying she found his comments "infuriating and disrespectful."

Ronquille said she never reported Travis McMichael's remarks, which he made while they were on duty at a Coast Guard station in Pascagoula, Mississippi, in part because he was a supervisor.

Also on the witness stand Friday, Kim Ballesteros testified that Greg McMichael once mocked a Black woman he rented a home to. Ballesteros and her husband lived across the street from the McMichaels roughly three years ago and were talking about their experiences as landlords.

Ballesteros said Greg Michael told her that he nicknamed his former Black tenant "the Walrus" because of her skin color and her size. He said he once disconnected her home air-conditioner during the summer when she was late paying rent.

"I was surprised," Ballesteros said. "It was racist and uncomfortable, and I was frankly disappointed."

Greg McMichael's attorney, A.J. Balbo, noted that Ballesteros continued to speak to Greg McMichael after the incident and that her testimony showed he had been willing to rent property to Black people.

Prosecutors' 20th and final witness was Carole Sears, a real estate agent from Larchmont, New York, who met Greg McMichael in 2015 when she and her daughter traveled to Brunswick for a court hearing involving a man who had killed Sears' husband in a drunken driving crash years earlier. Greg McMichael worked as an investigator for the local district attorney and had been tasked with driving Sears and her daughter to and from the airport.

Sears testified that on the return trip she mentioned she had just heard Julian Bond, a prominent civil rights activist from Georgia, had died and said she felt terrible.

She said Greg McMichael replied: "I wish that guy had been in the ground years ago. All those Blacks are nothing but trouble and I wish they'd all die."

Sears said he continued to rant for a couple of minutes while she sat silent and stunned.

"I didn't say a word," she testified. "I was a little afraid. I had never heard anybody speak that way, before or since."

Evidence that the McMichaels and Bryan held racist views of Black people is critical to prosecutors' case that Arbery's death was a hate crime.

Defense attorneys denounced their clients' racist messages as offensive and indefensible. But they also have said the deadly pursuit of Arbery was motivated by an earnest, though erroneous, suspicion that Arbery had committed crimes instead of his race.

Hoping to undermine prosecutors' argument that Arbery was targeted because of his race, Balbo played for the jury a recorded phone call Greg McMichael made to police in July 2019, roughly seven months before the shooting. He told police that he and Travis McMichael had just confronted a homeless man living under a bridge near their neighborhood, suspecting he might have committed thefts in the area.

The police call doesn't mention the race of the man under the bridge. Lindy Cofer, a neighbor of the McMichaels, testified she passed under the same bridge on her boat sometime in 2019 and saw a White man who appeared to be camping there. She didn't know if he was the same man spotted by the McMichaels.

On Wednesday, an FBI analyst walked the jury through roughly two dozen racist text messages and social media posts by the McMichaels and Bryan. Travis McMichael repeatedly used the N-word and other racist slurs in electronic messages, including some describing violence against Black people.