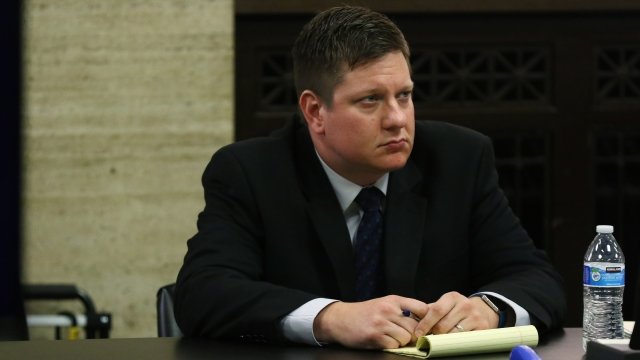 By Sebastián Martínez Valdivia
October 3, 2018
Attorneys on both sides rested their cases on Wednesday. Closing arguments in the trial are scheduled for Thursday.
SHOW TRANSCRIPT

Jurors in the Chicago trial of the police officer charged with murdering a 17-year-old got to go home early Wednesday, as the 10-day testimony phase of the trial ended.

Before resting its case, the defense for officer Jason Van Dyke entered a tire into evidence that Laquan McDonald reportedly cut with a knife before being shot to death.

The prosecution then called one witness — an officer who was on the scene the night of the shooting — before resting its case as well.

Over the course of the trial, Van Dyke and his attorneys have argued he was scared for his life. The prosecution has emphasized discrepancies between Van Dyke's testimony and the dash cam video, and the amount of times he shot McDonald — 16 times in all.

Van Dyke faces a charge of first-degree murder in the October 2014 shooting. Closing arguments in the trial are scheduled for Thursday.