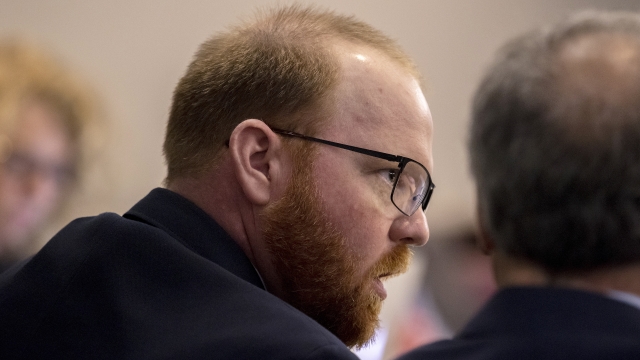 SMS
Testimony: Ahmaud Arbery Slaying Defendant Changed His Story
By Associated Press
By Associated Press
November 9, 2021
In court, a Glynn County police officer detailed what he spoke to Greg McMichael about at the scene of the shooting on Feb. 23, 2020.

The man who initiated the chase that ended in Ahmaud Arbery's death quickly changed his story about why he suspected the 25-year-old Black man running in his neighborhood was a criminal, two police officers testified Tuesday.

Glynn County police Officer Jeff Brandeberry told a jury that Greg McMichael — one of three white men on trial for murder in the case — at first told him that Arbery had been recorded by security cameras "breaking in all these houses out here."

"Well, he makes frequent trips to the neighborhood and gets caught on video cameras every third or fourth night breaking into places and no one's been able to catch him," McMichael told Brandeberry, who read in open court from a transcript of the conversation recorded by his body camera

The officer said he spoke to McMichael at the scene of the shooting, with Arbery's body lying under a sheet in the road nearby, as police first responded on Feb. 23, 2020.

McMichael's account shifted when he spoke with a Glynn County detective at police headquarters late the same day. Whereas he'd first blamed the slain man for break ins at multiple houses, McMichael told Detective Parker Marcy the intruder had targeted a single home — one that was still under construction with no doors or windows.

Marcy testified that McMichael told him he had seen "two or three videos" that showed "this guy breaking into or being or wandering around into this house."

Greg McMichael; his adult son, Travis McMichael; and neighbor William "Roddie" Bryan are charged with murder and other crimes in the death of Arbery. Glynn County police never arrested them. Instead charges came more than two months when cellphone video of the shooting leaked online and the Georgia Bureau of Investigation took over the case. The video sparked an outcry amid a national reckoning over racial injustice.

Prosecutors say the men had no legal reason to pursue Arbery with guns, as there's no evidence Arbery committed any crimes in the Satilla Shores subdivision outside the port city of Brunswick.

Prosecutor Linda Dunikoski showed the jury security camera video from inside the house under construction recorded just before the deadly chase. Arbery can be seen wandering through the open-framed interior but doesn't seem to touch anything. He ran after a neighbor outside called police.

"Do you see him take anything or steal anything from this location?" Dunikoski asked Marcy.

The detective replied: "No ma'am."

Defense attorneys say the defendants had reason to suspect Arbery was a burglar.

Franklin Hogue, Greg McMichael's attorney, noted that in the same interview in which his client told the detective about Arbery entering the house under construction, he also said there had been "numerous entering autos and break-ins" elsewhere in the neighborhood.

"Logic tells you this guy may be the one that's doing it," Greg McMichael said, according to the transcript.

Greg McMichael said the chase began when he saw Arbery "hauling ass" past his home on a Sunday afternoon. Saying he recognized Arbery from security camera videos shown to him by a neighbor who wasn't charged in the case, he ran inside and grabbed a .357 magnum handgun. Travis McMichael armed himself with a shotgun before they went after Arbery in a pickup truck.

Bryan joined the chase in his own truck and recorded the video of Travis McMichael shooting Arbery at close range.

Defense attorneys say Travis McMichael opened fire in self-defense. Brandeberry testified that Greg McMichael told him at the scene: "He attacked my son. He came at him. He tried to get the damn shotgun away."

Marcy testified that Greg McMichael said he armed himself because he suspected Arbery may have stolen a handgun from his son's truck several weeks earlier, though he acknowledged he had no proof. The detective said he asked whether the videos of Arbery inside the home under construction showed him picking up or taking anything.

"You know, not that I recall," Greg McMichael answered, according to the interview transcript that the detective read in court. "I don't think the guy has actually stolen anything out of there, or if he did it was early in the process. But he keeps going back over and over again to this damn house."

The jury on Tuesday saw several photos police took of Travis McMichael after the shooting, showing he had Arbery's blood on his hands, arms and spattered on his shirt, face and neck.

Brandeberry said Greg McMichael also had blood on his left hand, which he told police he had used to check Arbery for a weapon after the shooting when Arbery fell facedown in the street with one arm tucked beneath him.

Greg McMichael later told police he had shouted a warning to Arbery during the chase, when the running man ignored the demands of the men in the truck telling him to stop.