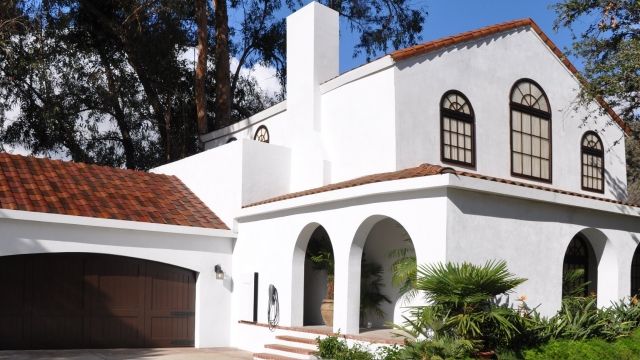 SMS
Tesla Doesn't Want You To Find The Solar Panels In This Picture
By Lindsey Pulse
By Lindsey Pulse
October 29, 2016
The tiles are camouflaged so they don't look like traditional solar panels.
SHOW TRANSCRIPT

Tesla wants to make homes more energy efficient by making solar roof tiles you might actually want on your home.

Company CEO Elon Musk unveiled the new series of solar roof tiles on Friday, along with the next generation of Tesla's energy-storing Powerpack.

The company says when they're actually rolled out, the glass shingles will come in a variety of styles to match different homes.

And the solar cells in the tiles are camouflaged so the shingles don't look like traditional panels. They appear opaque or transparent based on the angle you look at them.

So, from ground level, the tiles look pretty standard. But the closer you get to an overhead view, the more visible the solar cells are — kind of like a privacy screen on a cellphone.

Musk said the goal is to make the panels more attractive than normal roofs to generate electricity and also to be affordable. But he didn't list a price.

The roofs are also a stepping stone for Tesla to fully acquire SolarCity, which is helping produce the tiles. The announcement comes less than a month ahead of a scheduled vote to merge the two companies.

The tiles are just the latest in a series of efforts to attract the public to sustainable energy. Musk has long been an advocate for a worldwide transition to renewables.

And now is a really good time for Tesla to up its renewable game. A new report from the International Energy Agency found that renewable energy had record growth in 2015, and that trend is expected to continue.