Tesla's SUV: Fast As A Porsche, With 'Falcon Wing' Doors 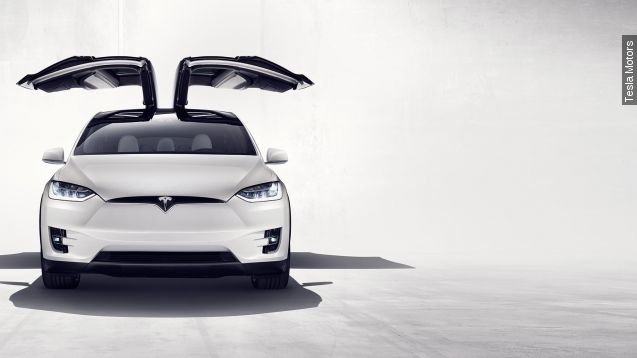 After nearly three years of rumors and concept images, the Tesla Model X is officially for sale. And much to the delight of Tesla fans, it's not your typical crossover SUV.

Obviously, it's an electric car, but what seems to be catching everyone's attention is the vehicle's performance.

With the Ludicrous Speed Upgrade, the Model X can reach 0-to-60 in 3.2 seconds. The Model X tops out at 155 miles per hour, and Tesla says you can drive up to 250 miles on one charge.

Which is good because depending upon where you live or where you and your six passengers are going, finding a charging station can be hard.

"With the Model X, we've created the safest SUV ever. It's the first SUV that's 5 stars in every category," Musk said.

CEO Elon Musk is referring to the crash test categories, which include frontal impact, side impact, roll-over and roadside hardware crash tests.

One of the biggest advantages for the Model X in these tests is the lack of a gasoline engine, which lets the front trunk act as what Tesla calls a "giant impact-absorbing crumple zone" — instead of a potential fire hazard.

"One of the main attractions of this vehicle are the falcon wing doors."And lastly, two of the most awesome and unnecessary features. First, the "Falcon Wing" doors. Much like the legendary DeLorean of Hollywood fame, the Model X has doors that rise so the passenger can "enter from both front and rear directions."

As well as draw the gaze of everyone in the parking lot.

And second, the abnormally long front window."It has the largest windshield of any production car. ... You feel all encompassed by the outdoors; you don't feel trapped by the inside of the car. It really is a kind of amazing effect," The Verge's Chris Ziegler said.

But for all the features Musk can pack into an electric car, he still hasn't been able to make a reasonably priced vehicle, and the Model X is no different.

The Model X is up for reservations online now, but don't expect to drive it anytime soon. According to Tesla, the new vehicles will be delivered in the second half of 2016.