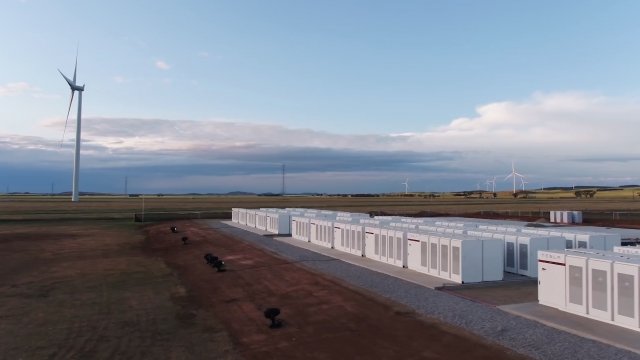 The Australian Energy Market Operator says if nothing is done, Australia is headed toward a major gas supply shortage in 2018.

A while back, Musk promised to help solve South Australia's energy problem. The state suffers from power blackouts due, in large part, to a gas supply problem. It's an issue throughout Australia, but South Australia feels a lot of it.

To remedy the problem, Musk bet he could install an operable Tesla battery system within 100 days of the date a contract was signed, or it would be free. Surprise, surprise — he did it.

The start date was Sept. 29. Now the battery is built, and it needs to go through some testing to make sure it meets South Australia and Australian energy requirements. It'll go live Dec. 1.

Several companies have already announced plans for their own electric trucks.

The battery charges on energy generated from the Hornsdale Wind Farm and has 100 megawatts of capacity. Tesla says once it's running, the Powerpack will have enough energy to power over 30,000 homes.

That's a pretty big deal for South Australia. The state experienced a crippling blackout in September 2016 following major storms. It left around 1.7 million people in the dark.

And AEMO, the Australian Energy Market Operator, says unless immediate action is taken, Australia could face a major gas supply shortage come 2018 — and South Australia would be one of the first hit.