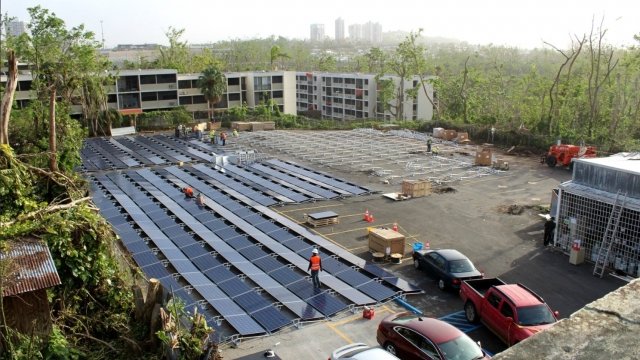 SMS
Power Companies Helping Puerto Rico Get Praise And Criticism
By Lindsey Pulse
By Lindsey Pulse
October 26, 2017
Tesla installed a solar field and batteries at a children's hospital San Juan. But another outside company is being scrutinized.
SHOW TRANSCRIPT

The lights are slowly coming back on in Puerto Rico, thanks to a few outside companies.

Tesla is starting with a children's hospital.

The company installed a solar field and battery packs at Hospital del Niño in the capital, San Juan. As of Thursday, only about a quarter of the island's power was restored.

CEO Elon Musk said this is the "first of many solar + battery" projects on the island.

At the beginning of October, Musk said Tesla could rebuild Puerto Rico's power system. The governor tweeted back, "Let's talk."

As Tesla gears up to expand its solar projects, a small Montana-based energy firm that was awarded a $300 million contract to help get Puerto Rico back on the grid is also causing a stir. 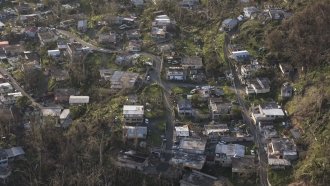 Puerto Rico Electric Power Authority awarded the contract to Whitefish Energy — a 2-year-old company that had only two full-time employees. The company is also from Interior Secretary Ryan Zinke's hometown.

Some lawmakers want Congress to review the circumstances of the contract and why it was given to such a small company.