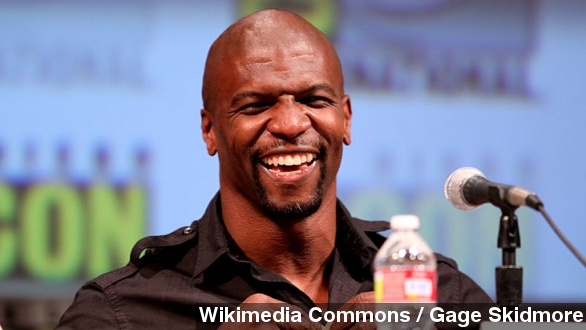 ​After just one year hosting "Who Wants to Be a Millionaire?" funnyman Cedric the Entertainer is out and Terry Crews is in.

Or this: "Old Spic body spray makes you smell like ppppppower." (Via Old Spice)

The ex-football star and actor is more recently known for his role in the series "Brooklyn Nine-Nine." The Washington Post points out plenty of fans seem to be excited about Crews being the fourth host of the show.

And Crews is pretty stoked about it, too. He said: "'Millionaire' is such a beloved franchise and I can't wait to get started as the new host. In addition to my film projects … and now being a first time author, hosting has always been a dream of mine, and I couldn't have asked for a greater opportunity." (Via The Wrap)

Disney-ABC President Janice Marinelli called Crews a perfect fit. "Terry is engaging, endearing, smart, and quick on his feet -- the perfect combination to lead one of the longest-running franchises in game show history." (Via The Hollywood Reporter)

A year is a pretty quick turnaround for the "Millionaire" hosting gig.

Cedric the Entertainer replaced Meredith Vieira, who left in 2013 after hosting the show for 11 years. But Cedric now says he has too much going on and the show's change in location is a big problem. (Via Entertainment Weekly)

Cedric released a statement saying: "A production based in Connecticut would make it quite difficult to maneuver the many moving parts on my plate. … It has truly been a fantastic ride hosting Millionaire this year — a really great time!" (Via USA Today)

Deadline Hollywood reports The show is moving production from New York to Connecticut in hopes of nabbing a tax break. Crews will begin hosting the show for its 13th season in national syndication this upcoming fall. (Via WHSV)