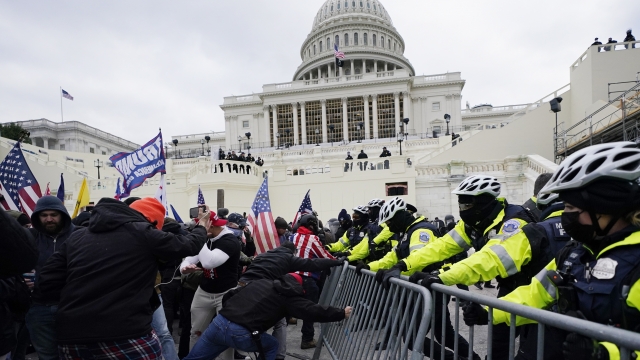 SMS
Counterterrorism Experts Say Domestic Terrorism Threat Is 'Persistent'
By Shira Tarlo
By Shira Tarlo
February 4, 2021
The House Committee on Homeland Security held a hearing on the ongoing threat of domestic terrorism in the wake of the attack on the U.S. Capitol.
SHOW TRANSCRIPT

The House Committee on Homeland Security held a hearing Thursday on the ongoing threat of domestic terrorism in the wake of the Jan. 6 attack on the U.S. Capitol.

"This act of terrorism was not an isolated incident," Homeland Security Committee Chairman Rep. Bennie Thompson said in his opening statement.

"Today we sit here just shy of 20 years after 9/11 to examine the increasingly prevalent and troubling threat of violent extremism — not from some distant land but from here at home," said Rep. John Katko, the panel's ranking member.

Expert witnesses told lawmakers that extremist groups, social media, misinformation and even former President Donald Trump all played a role in the assault on Capitol Hill.

The experts stressed urgency in meeting the current moment, warning recruitment has become "easier" as extremist ideas have been "mainstreamed and normalized" through "political speech, conspiracy theories and online memes."

"I do believe that we will be fighting domestic terrorism that has its roots and inspiration points from Jan. 6 for the next 10-20 years," warned Elizabeth Neumann, the former assistant secretary of counterterrorism and threat prevention at the Department of Homeland Security under President Trump.

They urged lawmakers to call out misinformation, explore policy changes and strengthen collaboration between federal and local law enforcement agencies.

"In regaining the narrative, we need to call these actions what they are: A direct assault on our system of government," said Christopher Rodriguez, the director of the District of Columbia's Homeland Security and Emergency Management Agency.

The hearing came one week after the Department of Homeland Security issued a warning about the "heightened threat from domestic terrorism," and President Joe Biden tasked the U.S. intelligence community to conduct a comprehensive assessment of the threat posed by far-right extremist groups.

"We, of course, have a review underway, a domestic violence extremism review underway by our national security team, to take a look at violence and this type of concerning group activity across the country," White House press secretary Jen Psaki told reporters Wednesday.