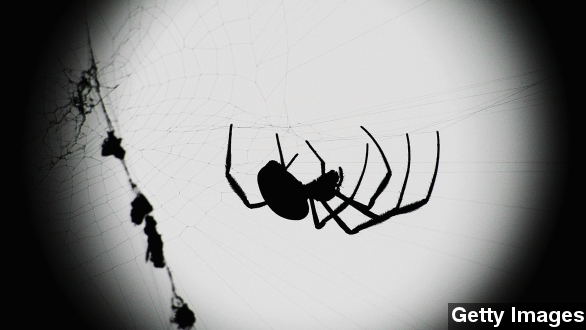 According to a new study, spiders that live in cities are bigger, fatter and multiply faster.

If you live in a big city and somehow weren't a little creeped out by spiders before, you definitely will be now.

According to a new study out of Australia, spiders get bigger and multiply faster when they live in the city. Cue the giant spider nightmares.

Researchers from the University of Sydney found that golden orb weaver spiders like this one living near heavily urbanized areas in Sydney tend to be larger, better fed and have more offspring than their country-dwelling counterparts. (Video via YouTube / MyBackyardBirding)

To come to this terrifying conclusion, the study's authors collected 222 female golden orb weavers from different places around Sydney and measured each area's urbanization based on qualities like leaf-litter cover, grass coverage and amount of hard surfaces, such as concrete.

The researchers then measured the spiders' body size, fat reserves and ovary weight to determine their reproductive capacity. And, sure enough, the more urban the area, the bigger, fatter and more potentially fertile the spiders were. Lovely.

One of the study's authors told The Atlantic's CityLab they believe two factors present in most cities are responsible for this so-called superspider trend.

First, the hot microclimates sustained by a paved-over city makes for an ideal environment for spiders to grow and thrive.

And second, thanks to the massive amount of artificial light in cities, they attract an abnormal amount of insects to the area. Translation: the spiders are never without a plentiful food source.

Now, this may seem like bad news all around for city dwellers. But as gross as spiders are, they're actually good to have around.

They eat insects we consider to be annoying pests, like flies and mosquitos, and keep their populations down. And they're also an important food source for other creatures, including frogs and toads. Ah, the circle of life.

While the research in Sydney was confined to just one species of spider, the study's authors say other types of spiders are probably reaping the benefits of city living too. You can check out the entire study in the journal PLOS One.