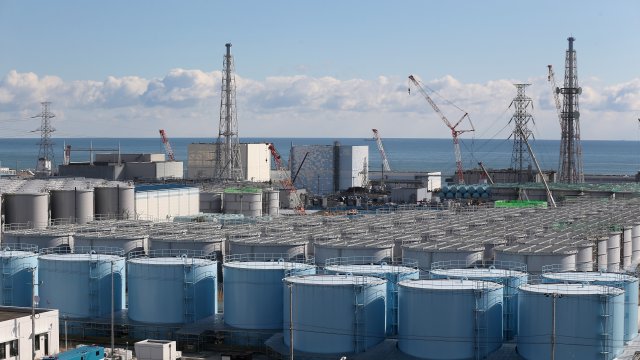 SMS
Workers Resume Removing Fuel Rods At Fukushima Power Plant
By Caitlin Baldwin
By Caitlin Baldwin
April 15, 2019
The fuel rods melted after an earthquake and tsunami back in 2011, and the cleanup plan expected to take up to 40 years to complete.
SHOW TRANSCRIPT

Workers in Japan are removing fuel rods from one of the three melted reactors at Fukushima Daiichi nuclear power plant.

Disaster struck the plant back in 2011. An earthquake and subsequent tsunami led to a massive hydrogen explosion, causing the fuel rods to overheat and melt.

Tokyo Electric Power Company, known as TEPCO, says it began removing the fuel rods stored in a cooling pool near Reactor 3 on Monday.

Workers in a control room hundreds of yards away are using a remotely operated crane to lift the radioactive fuel rods out of the pool and into a protective cask. The works is done underwater to prevent leaking radioactive material. More than 560 rods are stored in that pool, and the removal process is expected to be finished by 2020.

Workers will then move onto the cooling pools near two other reactors. There are about 1,000 fuel rods in those pools. It's all part of a massive cleanup plan TEPCO has said could take up to 40 years to complete.

Workers finished the fuel rod removal in the pool near Reactor 4 in 2014. That reactor wasn't in operation when the storm hit and wasn't melted.

Last month, officials lifted an evacuation order in one Japanese town near the disaster.