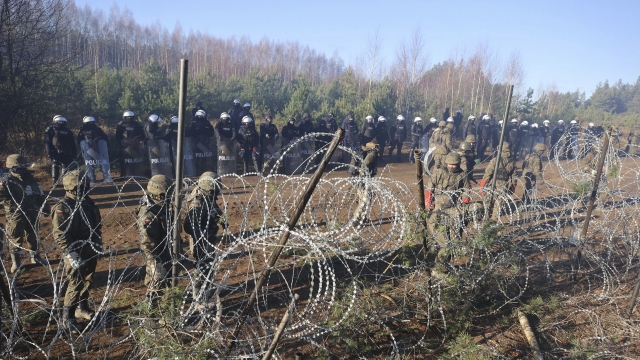 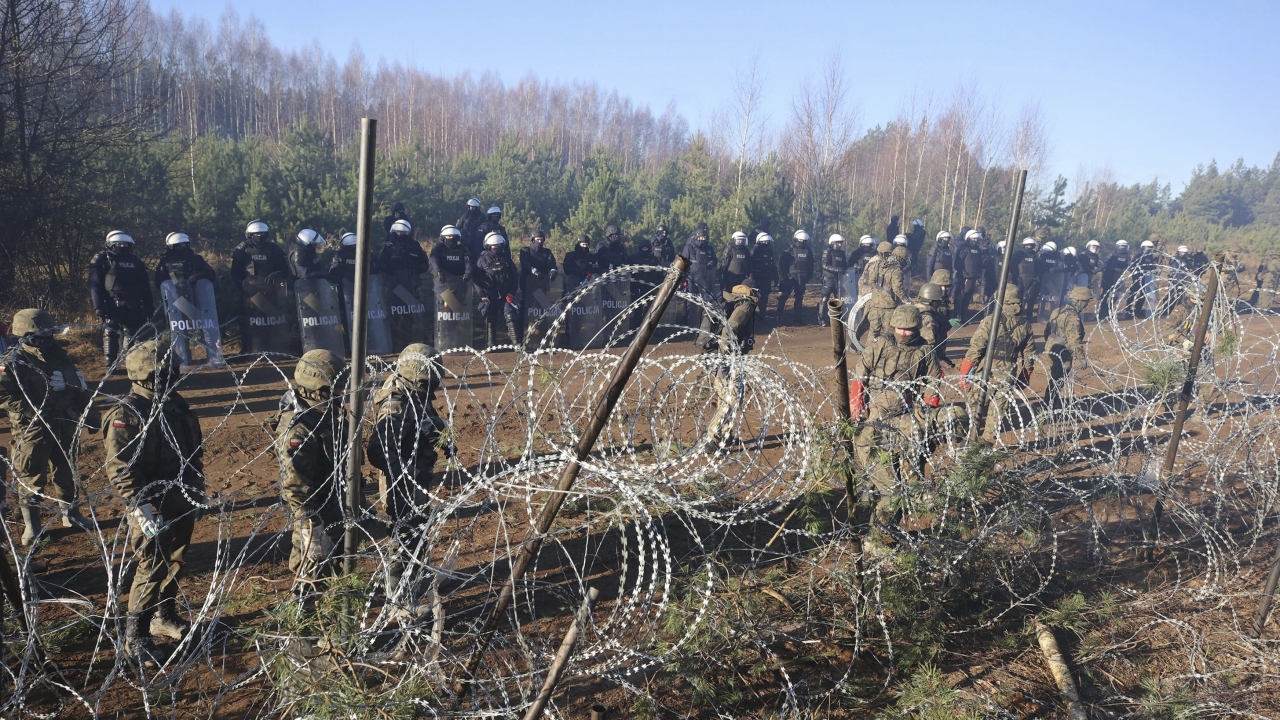 Poland reinforced its border with Belarus with more riot police on Tuesday, a day after groups of migrants tried to storm through a razor-wire fence on the eastern frontier where thousands have camped on the Belarusian side in the tense standoff.

The European Union accuses Belarus President Alexander Lukashenko of using the migrants as pawns in a “hybrid attack” against the bloc in retaliation for imposing sanctions on the authoritarian government for a brutal internal crackdown on dissent. Thousands were jailed and beaten following months of protests after Lukashenko won a sixth term in a 2020 election that the opposition and the West saw as rigged.

Polish authorities said all was calm overnight on the border — which is also the eastern edge of the 27-nation EU — but they were bracing for any possibility. The Defense Ministry said a large group of Belarusian forces was moving toward the migrant encampments.

During a special session of parliament, Prime Minister Mateusz Morawiecki described the situation at the border as part of an effort by Russia to disrupt a region that it controlled during the Soviet era that ended three decades ago.

“It must be strongly emphasized that the security of our eastern border is being brutally violated. This is the first such situation in 30 years when we can say that the integrity of our borders is being tested,” Morawiecki said.

Polish Maj. Katarzyna Zdanowicz estimated 3,000-4,000 migrants were along the border, including about 800 near the makeshift camps. Belarusian security services also were there to “control, steer and direct these people,” she added.

She said Poland's assessment came from aerial observations, alleging that Belarus authorities were taking journalists to the area to promote their version of events.

Independent journalists have limited ability to operate in Belarus, and a state of emergency in Poland kept reporters and others away from its side of the border.

The scene was quiet as night fell, and migrants were seen getting water and other supplies on the Belarusian side, according to Zdanowicz, based on what observations from across the frontier. She said guards prevented some small groups from crossing, part of hundreds of such attempts Tuesday.

The Belarusian Defense Ministry summoned the Polish military attache to protest what it called “unfounded and unlawful Polish allegations" against the Belarusian military at the border. It also voiced concern about the buildup of Polish troops there, saying Warsaw did not notify or invite Belarusian observers per international rules for activity involving more than 6,000 troops.

Speaking on Belarusian state television, Lukashenko threw the allegation of a “hybrid war” back at the EU, pointing at its sanctions against Belarus and adding: “And you, bastards, madmen want me to protect you from migrants.”

“I am afraid that this confrontation at the border because of migrants might lead to an active phase. These are grounds for provocations. All provocations are possible,” he said, accusing Poland's military of flying its helicopters low at the border, frightening the migrants.

In Moscow, Russian Foreign Minister Sergey Lavrov said the West bore responsibility for triggering the flows of migrants through their "aggressive wars in the Middle East and North Africa.” The migrants, he said, don’t want to stay in Belarus and “want to get to Europe that has advertised its way of living for many years.”

The crisis has simmered for months after Poland, Lithuania and Latvia accused neighboring Belarus of encouraging thousands of migrants, mostly from the Middle East, to illegally enter those nations. Many of the migrants often end up stuck in a forested area of swamps and bogs, pushed back and forth between Belarusian and Polish forces.

The Belarusian opposition urged the West to strengthen its sanctions on Minsk.

“It’s necessary to introduce tough sanctions, trade embargo and a full stop of transit of goods between the EU and Belarus,” Pavel Latushka, a leading opposition figure, said on a messaging app, urging Poland, Lithuania and Latvia, "as countries on the front line of a hybrid attack launched by the regime, to stop transit.”

On Tuesday, the EU tightened visa rules for Belarus officials, saying it was “partially suspending” an agreement with Minsk. The move affects Belarusian government officials, lawmakers, diplomats and top court representatives by requiring them to provide additional documents and pay more for visas.

Lawmakers in Lithuania voted to declare a state of emergency for a month along the Belarus border, restricting the movement of vehicles and banning all entry, except for residents, in a zone reaching 5 kilometers (3 miles) inland. Guards can check vehicles and people, and gatherings also are banned. It also applies to migrant accommodations in the capital of Vilnius and elsewhere.

At least 170 migrants were stopped from entering Lithuania on Tuesday.

In videos posted on Twitter by Polish police, the migrants were seen in tents and cooking over campfires in near-freezing temperatures. The police blared announcements that border crossing is allowed only at official posts, with visas, and the nearest crossing point in Kuznica was closed early Tuesday.

Refugee agencies UNHCR and International Organization for Migration called the situation “alarming,” and said they contacted governments in both Poland and Belarus to urge them to ensure that those in the makeshift camp get humanitarian assistance.

A man in the Polish village of Bialowieza told The Associated Press he has met many migrants who often are thirsty, hungry and in need of boots or medical care. He is among volunteers distributing food and other aid, and spoke on condition of anonymity because Polish authorities discourage such help.

“They are in really bad condition and the situation is getting worse" as temperatures drop, he said.

Some of the migrants believed they were in Germany and appeared to have been “very disinformed by Belarusian soldiers and guards," the man said.

At least eight migrant deaths have been recorded by Polish and Belarusian authorities, most of them in Poland.

Morawiecki went to the border Tuesday, accompanied by Defense Minister Mariusz Blaszczak, to meet with border guards and other security officials.

“We do not know what else Lukashenko’s regime will come up with — this is the reality," Morawiecki said, praising the guards.

Poland has received strong signals of solidarity from the EU and Washington in the confrontation with Belarus.

Germany’s outgoing interior minister, Horst Seehofer, said all EU countries “must stand together, because Lukashenko is using people’s fates — with the support of Russian President Vladimir Putin — to destabilize the West.”

Many migrants have flown to Minsk on tourist visas and travel by taxi to the border. The EU is seeking to pressure airlines not to facilitate such trips. Although direct flights from Iraq were suspended in August, migrants have been arriving in Belarus from Syria, Turkey, the United Arab Emirates and even Russia, according to recent internal EU reports seen by the AP. Smugglers use social media to advertise transportation from Belarus to Germany by car.

Pavel Usau, head of the Center for Political Analysis and Prognosis, said Lukashenko expects the West to make concessions.

“Lukashenko is provoking the West to take aggressive action, but, on the other hand, he expects that Western countries will yield to pressure and will be forced to engage in negotiations,” Usau said in an interview from Warsaw.