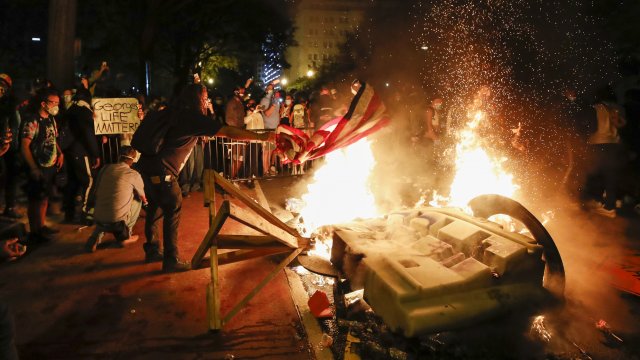 SMS
Tensions Flare At Protests Nationwide As Cities Enact Curfew
By Austin Kim
By Austin Kim
June 1, 2020
Protesters clashed with police in multiple cities while officials in Minneapolis are investigating why a tanker truck drove through a crowd Sunday
SHOW TRANSCRIPT

A tanker truck drove through a crowd of protesters on I-35W in Minneapolis Sunday. Officials say no one was hurt, despite the truck speeding through the interstate after it was closed.

John Harrington – Minnesota's Department of Public Safety Commissioner – said the male driver of the truck was sent to the hospital for non-life threatening injuries. He was released from the hospital, taken into police custody and charged with assault. State officials say they opened a criminal investigation into the incident. Harrington said he was unsure of the driver's motive.

Most of the protesters, who were marching against systemic racism, were peaceful in a number of cities across the U.S. But some of those demonstrations escalated at times throughout the day and into the night, as dozens of cities implemented curfews.

Tensions flared in Manhattan as the New York City Police Department tried to move a crowd back after a fire broke out. Mayor Bill de Blasio did not implement a city-wide curfew. But protesters did not disperse quickly Sunday night.

In Washington D.C., some protesters started fires in Lafayette Square near The White House. Police fired tear gas and pepper spray at the crowd - clearing out the park as the city's 11pm curfew took effect

There were reports of looting in major cities such as Chicago, Philadelphia and Los Angeles. L.A. mayor Eric Garcetti urged people to stay off the streets by announcing a city wide curfew, but encouraged people to continue the discussion about racial inequality.

"Let us fix those things together to make sure that the criminal justice system, as well as our entire society doesn't keep some people at the 50 yard line and others at the five yard line," Garcetti said Sunday.