Tensions Between The United States And Iran Go Back Decades 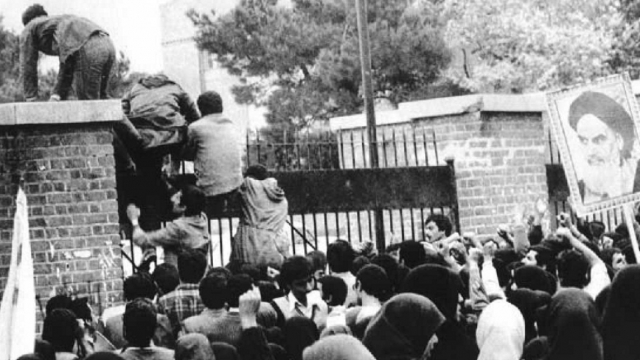 SMS
Tensions Between The United States And Iran Go Back Decades
By Katie Cammarata
By Katie Cammarata
November 4, 2019
The U.S.' relationship with Iran has increasingly grown sour after President Trump's withdrawal from the 2015 nuclear deal.
SHOW TRANSCRIPT

The U.S.' relationship with Iran, which was strained to begin with, has grown increasingly hostile following President Trump's decision to pull the U.S. out of the 2015 Iran nuclear deal. But tensions between the two countries have been simmering for decades.

First, some background. American and British corporations had controlled Iranian oil reserves pretty much since they were discovered. In 1951, Iran's newly-elected prime minister said he was going to nationalize the oil industry. U.S. and British companies were doing very well under the previous arrangement, so they didn't want to change anything about the deal.

In response, they devised a plan that eventually deposed the prime minister and installed a new, pro-Western government under the leadership of Shah Mohammad Reza Pahlavi.

Iranians were frustrated with what was seen as American intervention in their internal affairs. And over the years, Iranians became upset with the Shah's violent government, turning to spiritual leader Ayatollah Ruhollah Khomeini, who had been exiled from Iran for over a decade.

Anti-government riots and demonstrations broke out in 1978, and in January 1979, the Shah escaped to Egypt. Khomeini returned to Iran shortly after and was granted supreme power after the monarchy was dissolved. The Islamic Republic of Iran was proclaimed on April 1, 1979.

Fast forward to October of that year, President Jimmy Carter agreed to let the Shah into the U.S. for cancer treatment. Just after he arrived in New York in November, a group of 300-500 Iranian students stormed the U.S. embassy in Tehran, taking 90 people hostage, including 66 Americans.  The protesters demanded the U.S. extradite the Shah. Khomeini issued a statement in support of their actions and pulled out of military treaties with the U.S. and Soviet Union that would have allowed military intervention.

The Iranian students did release 14 hostages during the incident, leaving 52 Americans. They were never seriously hurt, but the hostages were demeaned — blindfolded and paraded in front of cameras and crowds and rarely allowed to change clothes. After 444 days and multiple attempts at negotiations, on the last day of President Carter's presidency and just minutes after Ronald Reagan gave his inauguration speech, all 52 American hostages were released on January 20, 1981.

Things never quite went back to normal between the U.S. and Iran. Reuters reports the anniversary of the hostage crisis is marked each year in Iran with anti-American demonstrations across the country. President Trump's withdrawal from the 2015 nuclear deal and re-imposing of economic sanctions on Iran has further incited a anti-American sentiments.

And it doesn't look like things are going to get better any time soon. Supreme Leader Ayatollah Ali Khamenei has banned negotiations between the two countries, decrying the U.S. as an enemy.