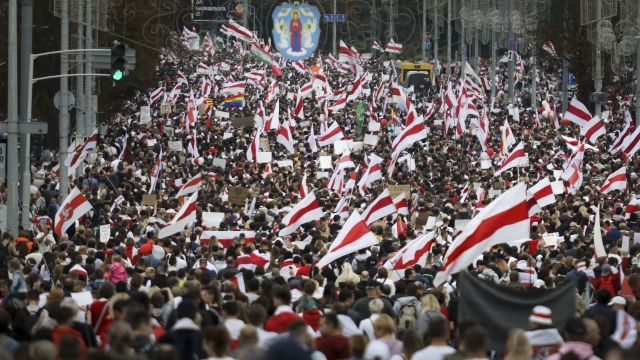 More than 100,000 people protested in Belarus' capital, Minsk, on Sunday, demanding President Alexander Lukashenko resign. Protests were also held in other major cities throughout the country.

This is the fifth week of protests against the authoritarian leader who has been in power for the last 26 years.

Protests began after the Aug. 9 presidential election in which officials say Lukashenko won in an 80% landslide over his main challenger, Sviatlana Tsikhanouskaya – giving him a sixth term. Protesters say the results were rigged. One poll worker told the Associated Press they were asked to sign an election-results document but told to leave the vote totals blank.

Often called "Europe's Last Dictator," Lukashenko's regularly repressed those who speak out against him. Lukashenko has even warned protesters that there would be no new elections "until you kill me." Russia agreed last month to send a police force to support President Lukashenko.