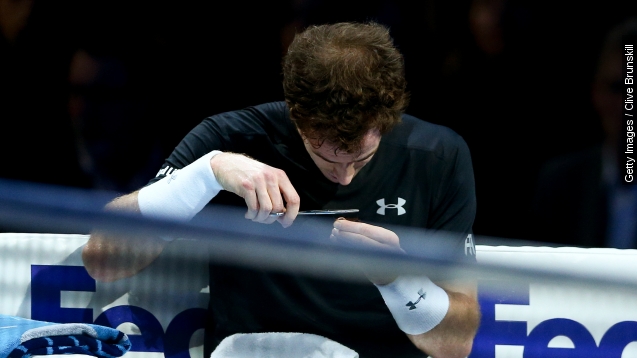 SMS
Tennis Star Andy Murray Gives His Bangs A Trim During A Match
By Grant Suneson
By Grant Suneson
November 18, 2015
Andy Murray seemed bothered by his bangs during a recent match, so he gave himself a trim. But it didn't help him beat Rafael Nadal.
SHOW TRANSCRIPT

We've seen professional athletes change their shoes or equipment in the middle of a game, but tennis star Andy Murray made a more unusual adjustment on the court Wednesday. He gave himself a haircut. (VIdeo via Rado)

During the first set, Murray was clearly bothered by his bangs while trailing Rafael Nadal in the ATP World Tour finals tournament.

So during a changeover, he channeled his inner barber, grabbed a pair of scissors and gave himself an impromptu trim.

After the match, the Scottsman said, "I had some hair in my eye, and I just wanted to get rid of it. That literally took two seconds. That was it. "

A bad hair day was far from Murray's only problem. He double-faulted four times while being trounced by Nadal 6-4, 6-1.