Telltale Games And Mojang Craft A Narrative For 'Minecraft' 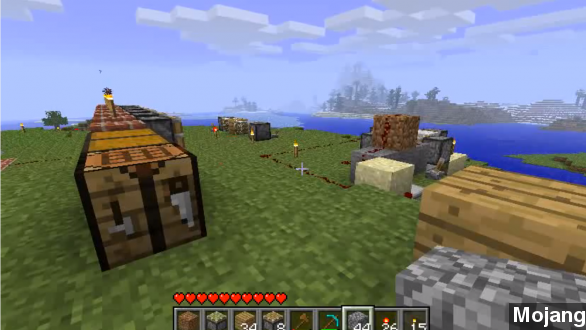 SMS
Telltale Games And Mojang Craft A Narrative For 'Minecraft'
By Evan Thomas
By Evan Thomas
December 18, 2014
"Minecraft" will be getting a stand-alone story mode, thanks to a new partnership with the storytellers at Telltale Games.
SHOW TRANSCRIPT

Mojang is teaming with Telltale Games to create an episodic story based on blockbuster block-buster "Minecraft."

Yes, this is the same "Minecraft" that took the gaming world by storm with its sandboxed — and decidedly story-free — building game. (Video via Mojang)

Mojang put together an interactive press release in which an enthusiastic developer explains: Mojang and Telltale will release the new game as a series of episodes whose stories are based on the "Minecraft" world but aren't official canon.

Official or not, the news of a "Minecraft" story caught some bloggers by surprise.

They point out "Minecraft"'s narrative draw never makes it much past "dig a hole," so Telltale's work will be cut out for it.

Although the occasional explosive creeper makes for a harrowing encounter, "there's no Tyrion Lannister they can bring out to automatically make a scene more interesting for players."

Exhibit A: Steve. Steve is the official name of the default player character in "Minecraft." But Steve is a blank slate, an avatar for player action. He has no story of his own, unless you count occasionally being set on fire. (Video via Mojang)

Telltale, on the other hand, has made a name for itself developing heavily character-driven game stories. So if anyone's going to make us root for Steve, it's probably this studio.

The first episode of "Story Mode," as it's currently called, will head to PCs, consoles and mobile next year.