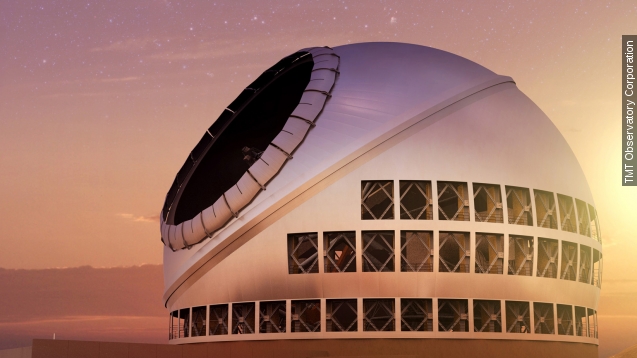 SMS
Telescope Construction On Sacred Hawaiian Ground Will Resume
By Evan Thomas
By Evan Thomas
June 24, 2015
The Thirty Meter Telescope is expected to collect astronomical imagery more detailed than even that of Hubble, but its construction has vocal critics.
SHOW TRANSCRIPT

Protesters are opposing the construction of a new telescope atop Mauna Kea in Hawaii — again.

Progress on the Thirty Meter Telescope, or TMT, stalled earlier this year after some protesters were arrested on the summit of Mauna Kea on the Big Island.

The mountain ticks all the boxes for a perfect astronomy location. It's more than 12,000 feet up, above much of the visual interference from Earth's atmosphere. Air and light pollution are minimal, skies are clear some 300 days a year and Hawaii is close to the equator, meaning a wide arc of both the Northern and Southern hemispheres is visible from the ground. (Video via National Astronomical Observatory of Japan)

From there, officials say the TMT's 492 hexagonal mirror panels will be able capture images more detailed than even those from the Hubble Space Telescope. (Video via Thirty Meter Telescope)

But there are already 12 scopes at or near the summit of Mauna Kea, and some native Hawaiians have opposed new construction on ground they hold sacred.

More demonstrations in March and April led to arrests, and protesters have returned to the summit ahead of Wednesday's planned construction. (Video via KHON)

In a statement, TMT officials say they've spent the recent idle months in dialogue with stakeholders.

"We are now comfortable that we can be better stewards and better neighbors during our temporary and limited use of this precious land." (Video via Thirty Meter Telescope)

If construction proceeds, the TMT will be on track to come online sometime in 2022.