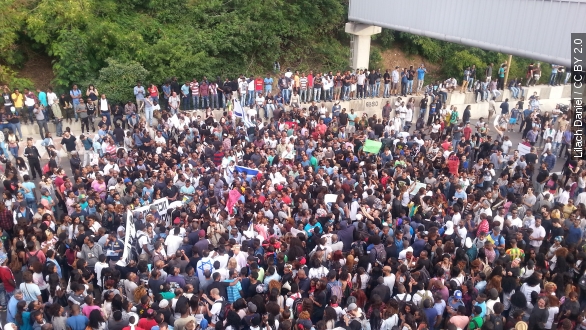 SMS
Tel Aviv Anti-Racism Protests Mirror Situation In US
By Ben Lawson
By Ben Lawson
May 3, 2015
Protests in Tel Aviv became violent Sunday as hundreds protested the beating of an Ethiopian Israeli soldier at the hands of police.
SHOW TRANSCRIPT

Demonstrations against racism and police brutality turned ugly Sunday, and this time we aren't talking about anything that happened in the U.S.

These protests took place in Israel. Hundreds of people marched in Tel Aviv after a video surfaced last week showing an Israel Defense Forces soldier of Ethiopian descent being beaten by police.

Protesters reportedly threw rocks and bottles at police before law enforcement used stun grenades, tear gas and a water cannon to disperse the crowd. The BBC reports at least 20 police officers were injured and 26 people were arrested.

It bears some striking similarities to what's happened in the U.S. over the last several months. Most recently in Baltimore, where the death of a black man in police custody sparked riots that resulted in injuries to police and several building fires.

Back in 2012, there were also protests in Jerusalem over landlords in southern Israel allegedly refusing to rent or sell real estate to Ethiopian Jews.

One of the officers accused of beating the IDF soldier has already been removed from the police force.